Another week means another painted mini! Well... sort of. I re-based and added to three minis I had previously painted the last time I started working on a larger Malal themed Warriors of Chaos army (back in 2012? 2013??). So here are three of the newly touched up Horns of Malal! 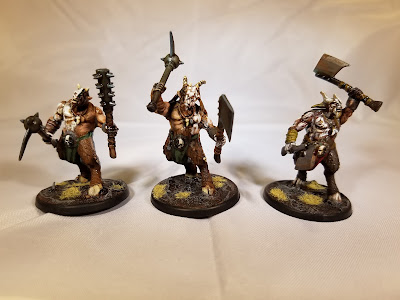 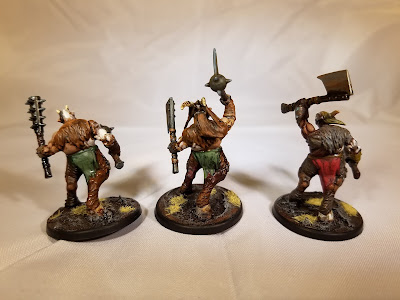 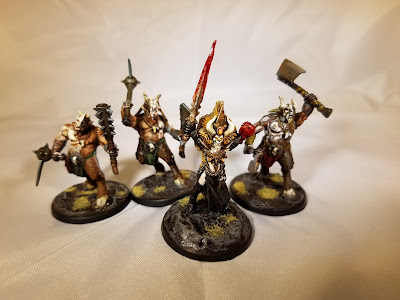 I touched up the warpaint and added a bit more black to make the contrast a little starker. I may go back and add a few more detail highlights on some of the hair but overall I'd say these are done.

Spent a bit of time this past week transforming two different toys into one bad ass Chaos Lord on Manticore stand in model. Here are a few WIP photos of where that project is at: 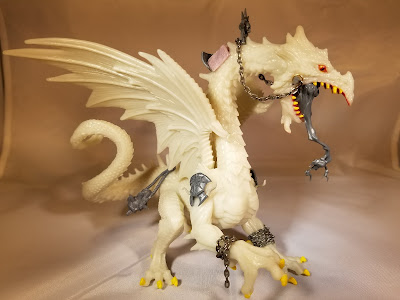 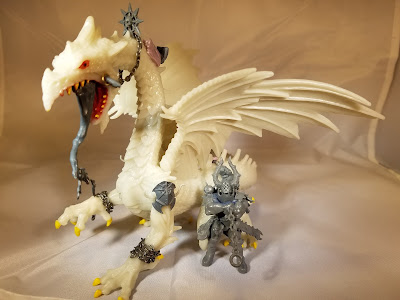 Scale is pretty much perfect for a Manticore but it looks cooler I think. This plastic is glow in the dark which I was thinking of keeping in some areas but I am undecided as of yet. Got it for $15 and it's got a lot of detail. Added a few bits and presto! Just need to get it on a base next... 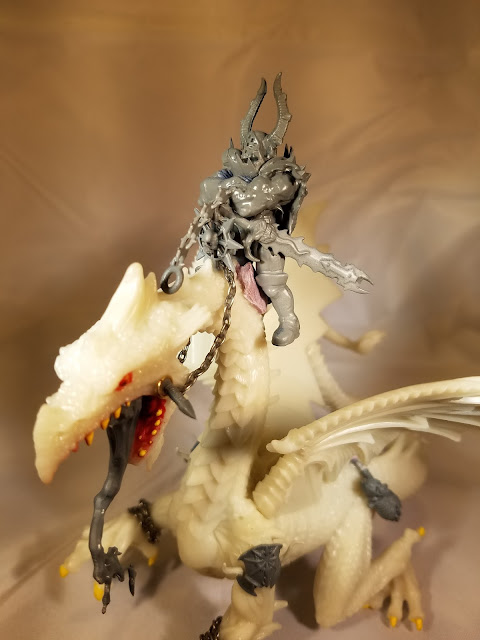 The Chaos Lord was some old DC toy of Darkseid. I chopped off his head and added some bits to make him a bit more "chaos" but I wanted to keep his folded arms and "I really don't give a shit.." pose. Seems to work well on the back of a big monster!

Speaking of monsters... I built another Exalted Hero/Chaos Lord for the footsloggin' and choppin' needed in a world gone mad. 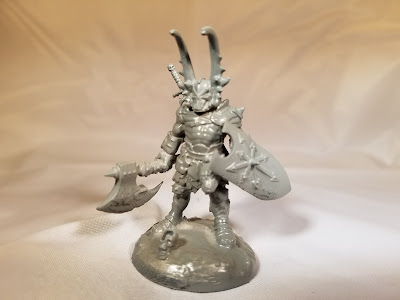 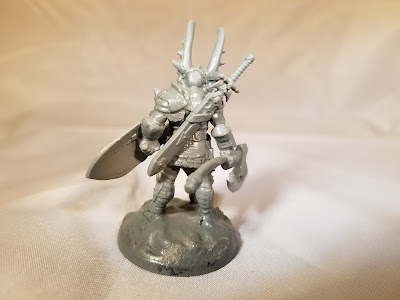 Started with a very cool Reaper Bones mini and added a different head and shield. Wanted to make him slightly WYSIWYG so I threw on the sheathed sword to represent two hand weapons. Very excited to get this mini painted up in a suitably Malal style! 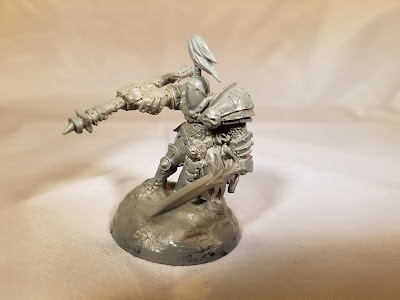 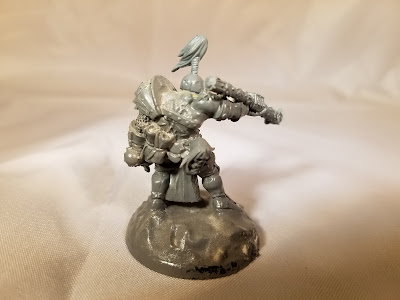 Another chaos warrior of Malal. I didn't like the head this one came with so I put on one I had left over from the Blightkings box and I think it is a great fit! 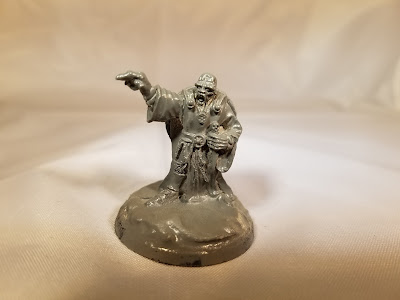 And lastly I wanted another decrepit magic user of chaos to have as an option so I based up this custom Blood Bowl mini from a Chaos Cup (I think?) - was originally meant to be a Wizard or Coach I guess. Not easy to see here but he has a shield strapped to his back as well.

Less painting this week but plenty more prep for the painting table was completed! Assuming I can get through my piles of homework I hope to get some more done this week so tune in next time...
Posted by Randroid No comments: 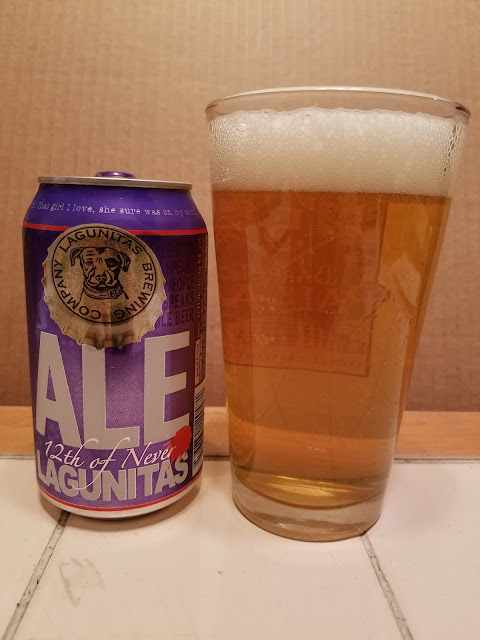 Appearance: Cans man. Cans! I think the name refers to never putting beer in a can. Beer poured a clear straw color with a fluffy white head.

Smell: Hops at the front with some citrus, floral, and pine aromas all at once. Not in a bad way.

First Drink: Similar to the smell but not as hops forward. A nice malty flavor comes through as well as some bitterness.

Mouthfeel: Medium-light and refreshing with a good amount of carbonation.

Drinkability: Very drinkable. Could easily drink a few of these in one sitting.

Notes: Kind of hard to find this in my area. Hoping it becomes more widely available.

Verdict: 4.75 out of 5. Very well done pale ale that doesn't skimp on the flavor or aroma.
Posted by Randroid No comments:

It has been a slow week of painting and a busy week for basing and terrain building. But... I promised something special... and it's time to deliver the goods! Behold! The first of what will hopefully be a decent sized force dedicated to Malal!! Building something I can use in AoS28 for fun. 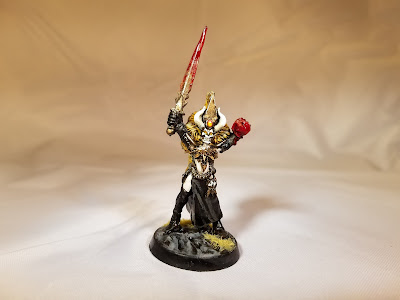 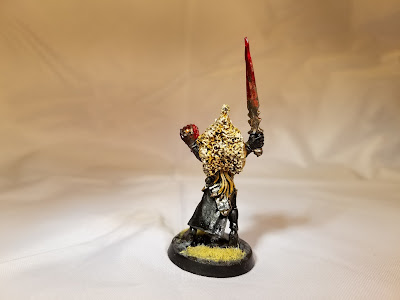 This Priestess/Sorceress of Malal was a lot of fun to paint. I'm working on a gritty/grimy look with plenty of contrast and I think this mini fits the bill. I've added a larger base (from 25 to 35mm) but otherwise I call it done! More worshippers of Malal are in the works... coming from the shadows near  you soon...

In other Chaos news check out these massive slugs! They will be used as Beasts of Nurgle.


These guys are really gross looking though it's kind of hard to tell from this photo. I added a few boils/blisters/eyeballs to the back of their heads as well. And while we're talking about Nurgle here are a few Chaos Knights! 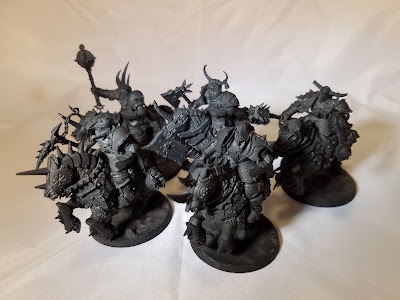 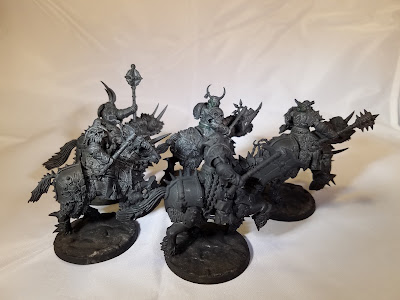 Lots of small modifications here mostly in the heads and bodies. I put them on a 40mm base which is probably too small but I like the look of it. If it drives me or my opponents crazy I will stick them on a 50mm base later on.

And what update with Chaos would be complete without a bit of Khorne? 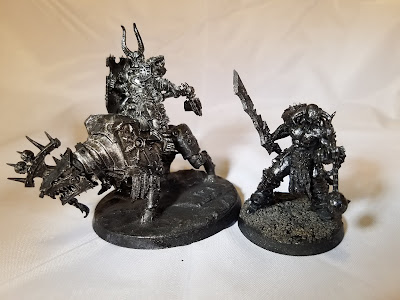 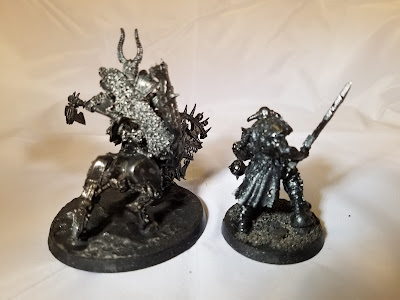 Two more Heroes join the fray (of unpainted by black shiny primed miniatures for the Bloodbound/Mortal Khorne)! I can't wait to paint up the Lord on Juggernaut. Really cool mini and the Slaughterpriest is a good looking one too.

Next week expect more Chaos or maybe I'll sneak in a few more Dwarves instead. You can never have too many Dwarfs.
Posted by Randroid No comments: 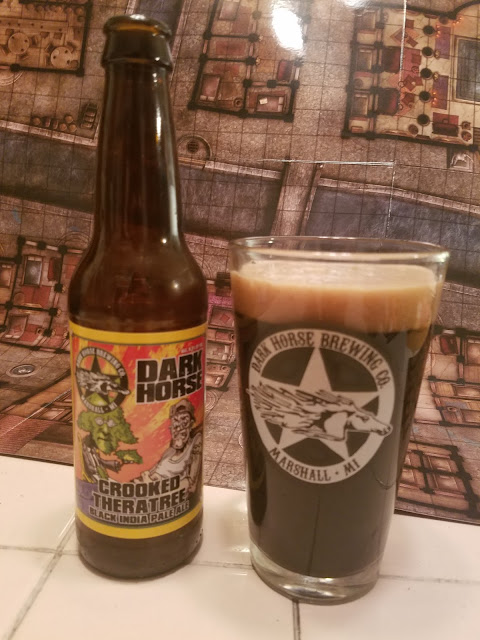 Appearance: Label is a variation on the classic Crooked Tree only dressed as a therapist. Beer pours a jet black color with a decent tan/light brown head. Looks more like a porter.

First Drink: Rich flavor with a lot of roasted malt and grain coming through right away. Hops kicks in more towards the end with a pleasing bitter finish.

Drinkability: This is a balanced black ale and you can't really taste the higher ABV.

Notes: Not sure how widely this is available as it was a limited IPA sampler selection.

Verdict: 4.25 out of 5. A nice departure from other black IPA/ales out there.
Posted by Randroid No comments:

Well I didn't get this update up last week but here is the mini for week 6.... another Dwarf adventurer! 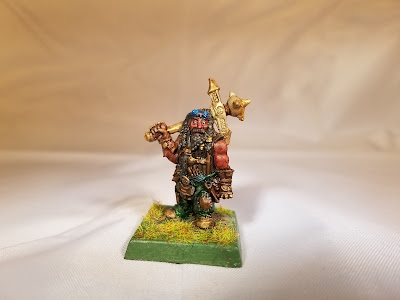 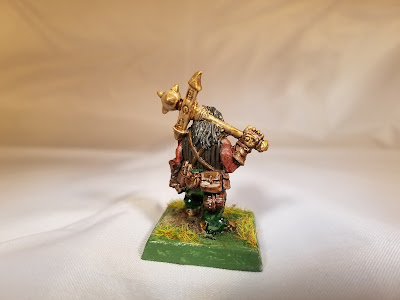 I don't have a name for this fella yet. He looks like a miner/self sufficient type individual. I imagine him being a bit of a loner who teams up with others when duty calls. Happy overall with how he turned out.

And while I didn't paint any other minis I did spend a bit of time completing my bits extension version of three Blightkings! Here they are in their WIP state. 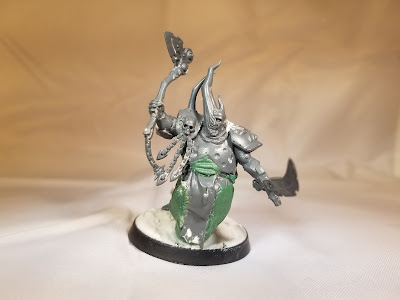 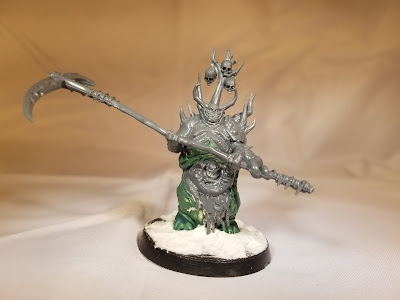 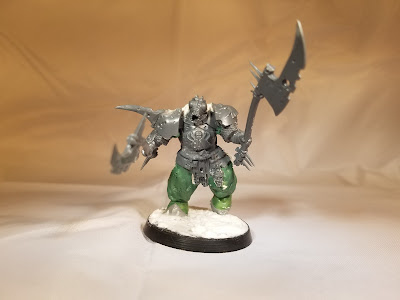 While they didn't turn out quite as cool looking as I had imagined (always learning more about how to sculpt well with GS) I think they will fit nicely with my other minis. Plus they weren't doing me any good sitting around in a bits box or on a sprue! That means I managed to squeeze 8 (possibly 9) models out of just the one box! Granted I had some other tasty Nurgle bits left over but not a bad little value!

Speaking of bad... picked these guys up cheap to add a bit to and use for Beasts of Nurgle.


They look gross enough to avoid already! Later this week I will update with some more WIP of them on bases as well as the next painted mini! Here's a hint... some say there is no malice in Warhammer.
Posted by Randroid No comments: 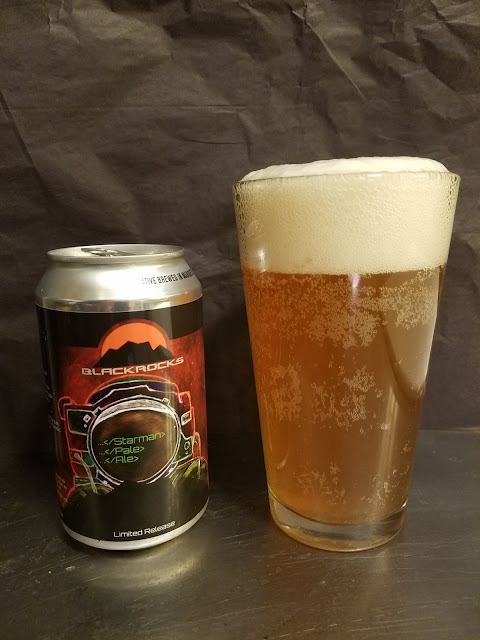 Appearance: Black space art on a shiny can. Beer pours a hazy straw color with plenty of off-white head.

Smell: Not a lot coming out but I can certainly smell a mix of hops.

First Drink: Same as the aroma. Early hit of hops followed by just a bit of sweetness then back into a mellow citrus/hops bitterness to finish.

Drinkability: Nice easy drinker for those times when you just want a pale ale.

Notes: Just became available in my neck of the woods but it's brewed way up in the UP eh.

Verdict: 4 out of 5. Blast off into the hops zone.
Posted by Randroid No comments:

January is over!!? Oh man... time moves a little too quick sometimes. This week I spent very little time with a paintbrush or glue. Between work, class, and homework drawings I have had very little time for hobby stuff. But that didn't stop me from finishing a miniature for this week!! 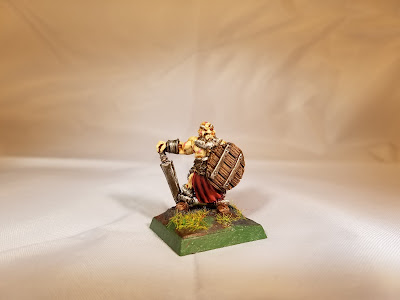 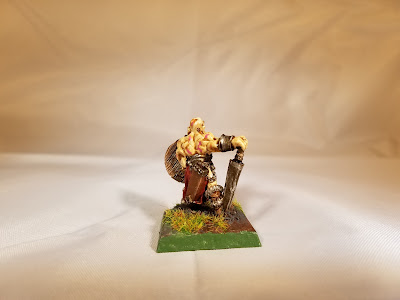 Meet Greybeard the old Dwarf Barbarian. He's been around... seen a thing or two... has a couple scars to prove it. This was a fun little miniature to paint. As soon as I saw it I knew I wanted this to be an old man barbarian. He has the sinew and leather kind of build going on.

I've also been building various minis for more of my This Is Not A Test collection. I can't seem to find my photos of the Cannibal Mutant warband I have been putting together but I did find this photo of their dogs! 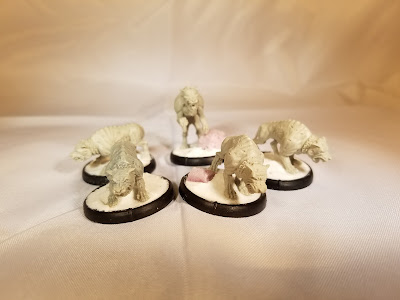 Probably managed to break off their chains and are running around looking for fresh meat right now. I better get back to the basement and see if I can keep them from getting loose! Until next time...
Posted by Randroid No comments:

Labels: 52 minis, dwarfs, progress, report, this is not a test, tnt 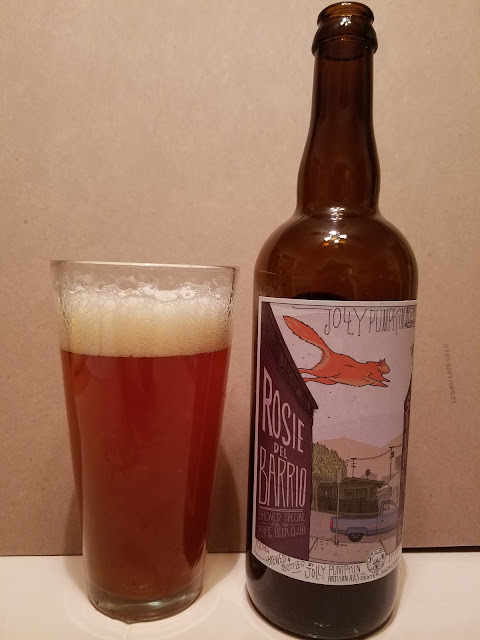 Appearance: Bomber with some art of a cat jumping off a building in an alley. Beer poured a hazy golden orange color with a thin but frothy beige head.

First Drink: Sour (of course) but pretty diverse hits of flavor - berries, lemons, something a bit woodsy and vanilla.

Last Drink: A lot of stuff going on here. More ripe fruit flavors (stone fruit?) and something a bit floral as well. Complex.

Drinkability: This is a sipper if ever there were one!

Notes: I believe this was a one off special beer (says it was made for the rare beer club). It was given to me as a gift.

Verdict: 4.5 out of 5. A nice wild sour with quite a bit going on.
Posted by Randroid No comments: