Here is the part where we talk about Blood Bowl... specifically Zlurpee Bowl. This year I brought another For The Love of the Game team - TROLLS! Basically Goblins with no secret weapons and three Trolls (counting Ripper the star player). Mostly I wanted to finish painting my Crablings team and use them in something... which I did!

I can't seem to find my roster anywhere... but from memory I took 11 Goblins and the 3 Trolls with 2 rerolls, am Apoth, and 1 Fan Factor. The Trolls had most of the skills - both with Guard, 1 with Break Tackle and 1 with Juggernaut. I had 2 Goblins with Catch, 2 with Side Step, and 1 with Sure Hands.

Played 5 games! I couldn't even remember what happened really! In part because I spent the night before the start of the tournament in Detroit watching John Carpenter perform live!


After getting about an hour of sleep I piled into the car with Furry and headed to Indiana for the tournament. I didn't do a good job of taking notes but I did grab a few photos and you can see my final score below: 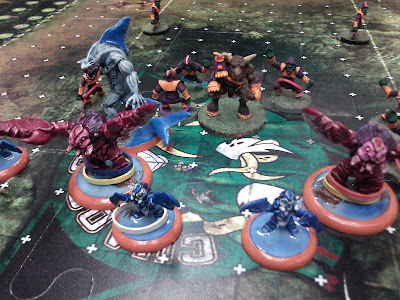 Played against some very tough teams and only managed to win the last game... for last place! Great mix of coaches and teams though and I had a really fun time even though my team was a pile of hot garbage who couldn't be counted on to make a 3+ dodge with a reroll to save their lives.

At the end of the day I walked home with the Weak Sauce (last place) award. I am now in the proud club of having the last place award for both Chaos Cup and Zlurpee Bowl! Yah!!!

Coming up next we have Chaos Cup!! Another annual favorite/onslaught of pain and endurance! This year I thought it would be fun to bring something new and different (and to finish painting another team I have sitting around collecting dust).... Dark Elves! Here is my current roster:

Really wanted to play something with more agility and a running game. Also wanted to bring the Assassin because why not!? Sure it is not the "best" choice but I am more interested in having fun and doing something different. Obviously I don't care much about winning. Here are a few photos of the WIP Dark Elves:


Still a lot to paint on these elves and I am running out of time to do it! Here's hoping I can manage to get them done and on the pitch for the event. I did manage to finish painting up a Vampire for this year's Chaos Cup Legacy Team though! Pretty happy with how he turned out: 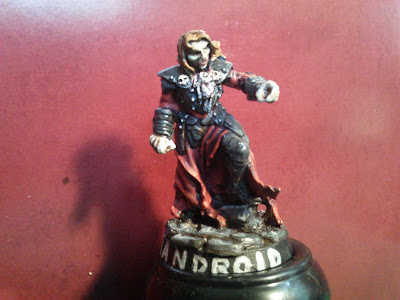 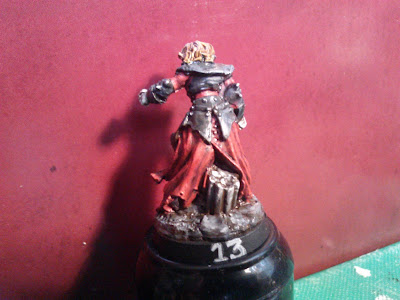 Looks ready to kick ass and suck blood and not necessarily in that order! Meaning he will probably fail a bunch of blood lust rolls...

Also painting up a few wasteland critters from This is Not a Test for charity. Just a quick bit of paint.. hopefully they go to some kids in need of mutant rats, snakes, and roaches! 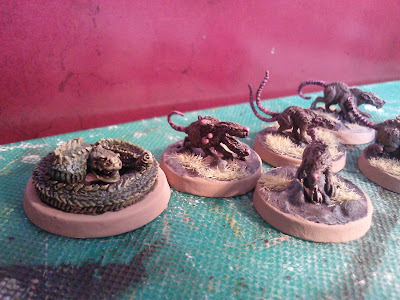 And that is all for now. Made the choice to go back to school and get some kind of degree (as my job will foot the tuition bill) and settled on an Art/Illustration degree. Expect to see some of that stuff pop up here from time to time among the other random updates. Apologies to the beer lovers as I haven't been giving the beer reviews a proper place on the blog. Been drinking less and my archive of reviews is buried in files from my dead computer. I'll try and remedy that soon! Til next time..
Posted by Randroid No comments:

Been slacking! Many things have happened since I last updated and I figured I should try and capture as much as possible here for historical reasons if nothing else...

First up I did manage to finish painting my big guys for the 750pt 40k tournament and I managed to play three games without messing up too much! I think I even won a couple games and tied another. Here are a few highlights:

Game 1 was vs Imperial Guard with a lot of armor (not shocking). Not the most "friendly" list but the forces of Nurgle remained triumphant and nearly tabled the IG (who forfeit on the second to last turn). In this game I learned the importance of cover saves, barrage weapons, close combat with vehicles, and that my Nurgle Daemon Prince was a nice slice of (moldy) cheese.


Second match of the day was against Skitarii (Adeptus Mechanius). Really fun game though we didn't finish as it was both of our second games at 750 pts and we had to look up a lot of rules. Plus the Skitarii have some pretty cool special rules. I like the look of them. Must resist....


Final game of the day was against the Tau. Plenty of fire support, armor, and GUNS oh my. First few turns saw most of the Daemons blasted off the board before the Tau got aggressive with objectives and fell right into the Daemon Prince trap. NOM NOM he ate them all in about 3 turns. Win?!?

For those who are wondering here is the list I brought to the event:


Our 1,000 point escalation event was this past weekend but I wasn't able to attend. The only thing I added to get from 750 to 1,000 was a Great Unclean One w/ Greater Reward and Psyker lvl 2. Kept the Daemon Prince as a Heavy Support choice and added a psyker level 1 to him. Filth!? Beyond 1,000 I am thinking more troops, maybe some cultists, and Beasts of Nurgle.

By the way here is the mini I am using for my Great Unclean One... the glorious Glottkin! 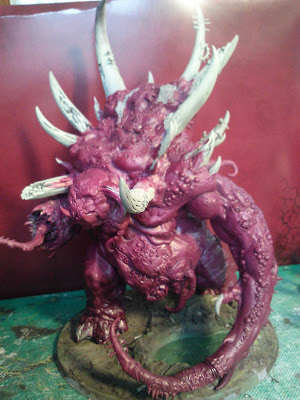 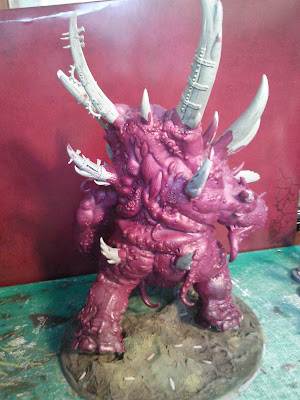 Here is assembled with a start on the basecoats. He comes with his brothers of course but I wanted to have the option of leaving them off so I simply magnetized them and made bases for them to live on when they aren't riding their big brother around. 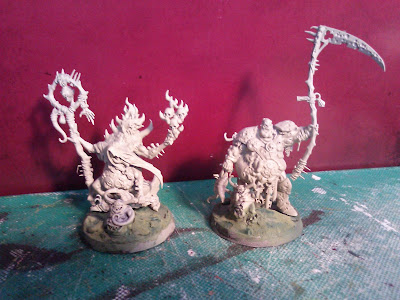 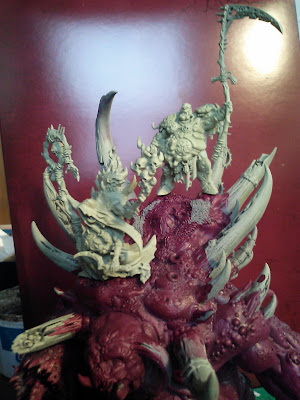 And I did manage to paint up a few Nurglings and Nurgling bases/objective markers as well. I think I forgot to put their WIP photos up here as I was working on them (I threw in a few WIP of the Daemon Prince too for good measure)! 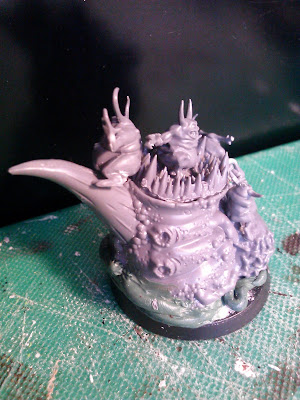 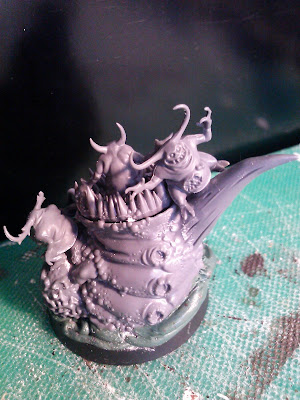 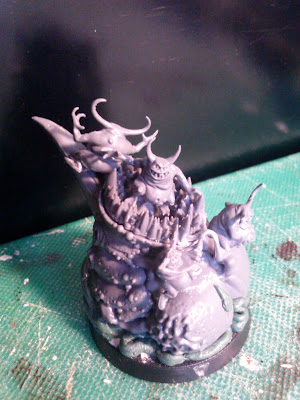 Playing on a gross "not dick" growth is a favorite past time of all Nurglings... or so they tell me. 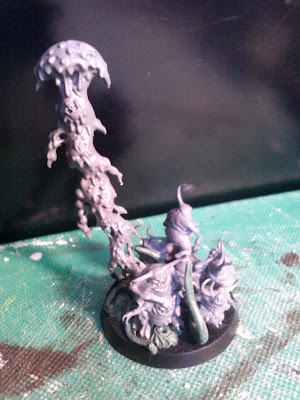 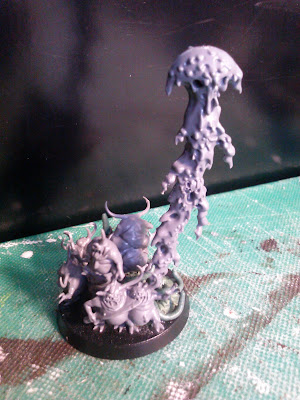 Can't beat a little shower from the tentacle pit to get your day going Nurgle style! 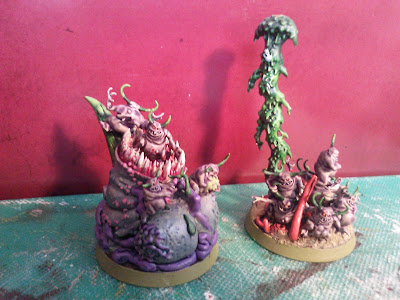 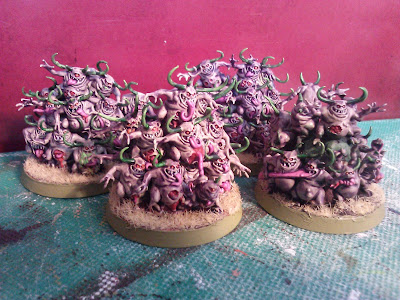 And here they are with some paint on them. Still need to seal them and add the final disgusting details. 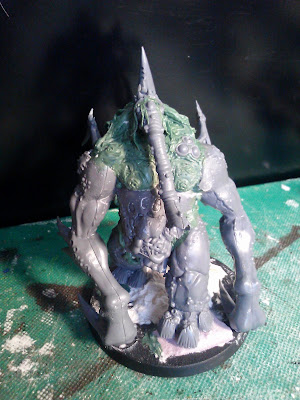 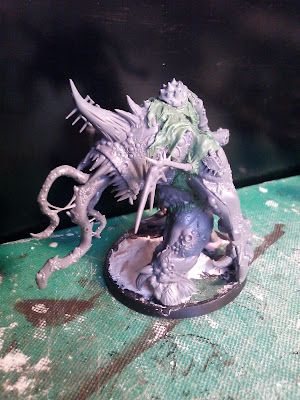 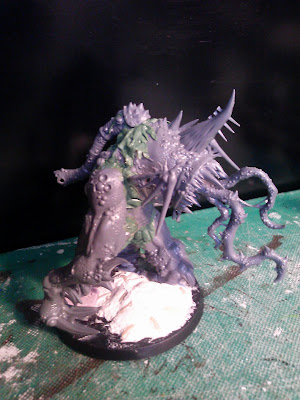 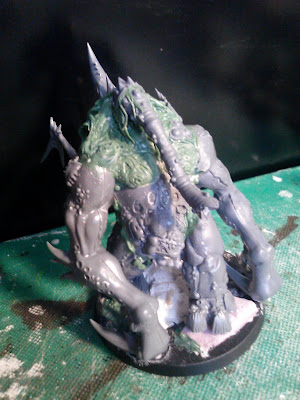 It's a bird? A spewing mouth? A gut faced goon? Hell whatever it is you don't really want to get into Close Combat with it I can tell you from experience.

That's it for the 40k side of things! Check back for part 2 where I detail the current state of Blood Bowlness and my plans for Chaos Cup 2016!