Catching up! My work and class schedule has thrown a wrench into blog posts and painting. While I haven't been posting photos of progress I have been working on a big summer project for an upcoming Blood Bowl event in September.

The first Legends Cup! Participating with other coaches to build some of the teams of legend from Blood Bowl to play against one another in a theme heavy tournament. Participation in the event was done by invite only so I feel pretty lucky to have made the cut. I was assigned the Goblin team known as The Greenboyz.

Not much fluff out there for this team outside of a short mention in White Dwarf 101 and a little bit in the new Death Zone Season 2 supplement. I'll get more into the team fluff as things progress... in the meantime here is a test mini for a potential paint scheme of the team. The existing fluff makes no mention of the team color scheme so I have been giving freedom in that regard. 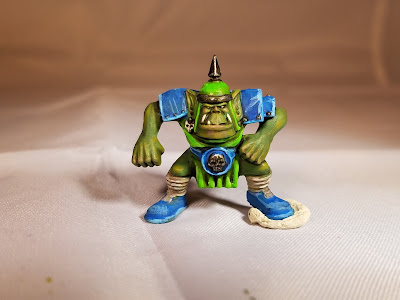 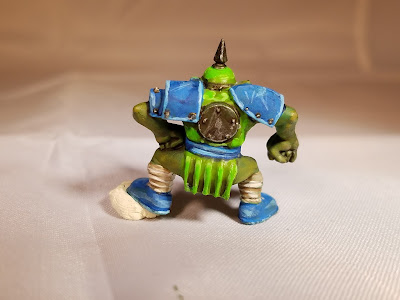 For this scheme I wanted a medium/dark tones skin with a bright neon green cloth and blue additions. Then a bit of white and metal. I'm liking the 90's era GW paint scheme I ended up with but I am currently working on a slightly different direction (hint - it's lots of green).
Posted by Randroid No comments: