Well so much for those "resolutions"!!! At least the one where I update every week. In my defense it has been quite hectic with the new job/traveling for weeks at a time situation. Still! I have managed to get some gaming in here and there.

About half way through a Risk: Legacy board. I have won 2 of the 7 games and at least 2 more of those were narrow victory margins where my opponents kept me from winning (as they tend to do). It has been a fun time though and I look forward to seeing where the game goes in the last half.

Also managed to get in some Pathfinder in one of my societies games. Almost level 7 with my half-orc Monk and having lots of fun hugging and punching things out of the fight (unless they have DR or Hardness or some other thing I can't overcome which is starting to be more common).

And then there is the tabletop action. Hopefully playing some Mordheim practice games this week and there is a WHFB escalation group hitting the ground next month. Hoping to bring my Vampires to those games and wrote two lists I am trying to pick between for our first games (at 800 points).


First list is all mounted Vampire all the time.

Basic idea is to put the Vampire in the Black Knight unit and use the Hexwraiths and Dire Wolves to screen and redirect until they can get into combat where hopefully the Red Fury kicks in and shreds a few units along the way. Never used Hexwraiths either so it would be good practice.

The other list I have is more of a foot slogger list with more Core units and no Vampire.

This list is more traditional and less fighty with okay magic, decent hero, tricks, and more bodies. Also a good reason to get more of my Core units painted up. This is probably the list I will go with even though I think it has less chance of winning. Not really worried about winning just want to have fun and get some paint on my army.

My "competitive" VC list would be different and be more of an Undead Horde and less of the standard 8th edition VC book. Skeleton power!!! Thoughts and suggestions are welcome of course.

Also working on getting ready for the third Dog Bowl held at the local gaming event here in town Marmalade Dog. Working on prizes and a dugout to give away to one of the winners. All of this and I leave again on Friday for another week!! So much to do and so little time to do it.
Posted by Randroid No comments:

Well here we are in 2015. The future? It doesn't feel like anything has changed dramatically. I realized I am going into my 8th year of this blog and this hobby. Don't have a lot to show for it on the painted model front but I will always have the memories (thanks to the blog posts).

Started the year off painting in my living quarters (aka a hotel room) a bit. Not easy and probably not something I will continue to do in the remaining month or so of my time away from home. I did manage to get some skin painting done of my Deadzone plague minis though. 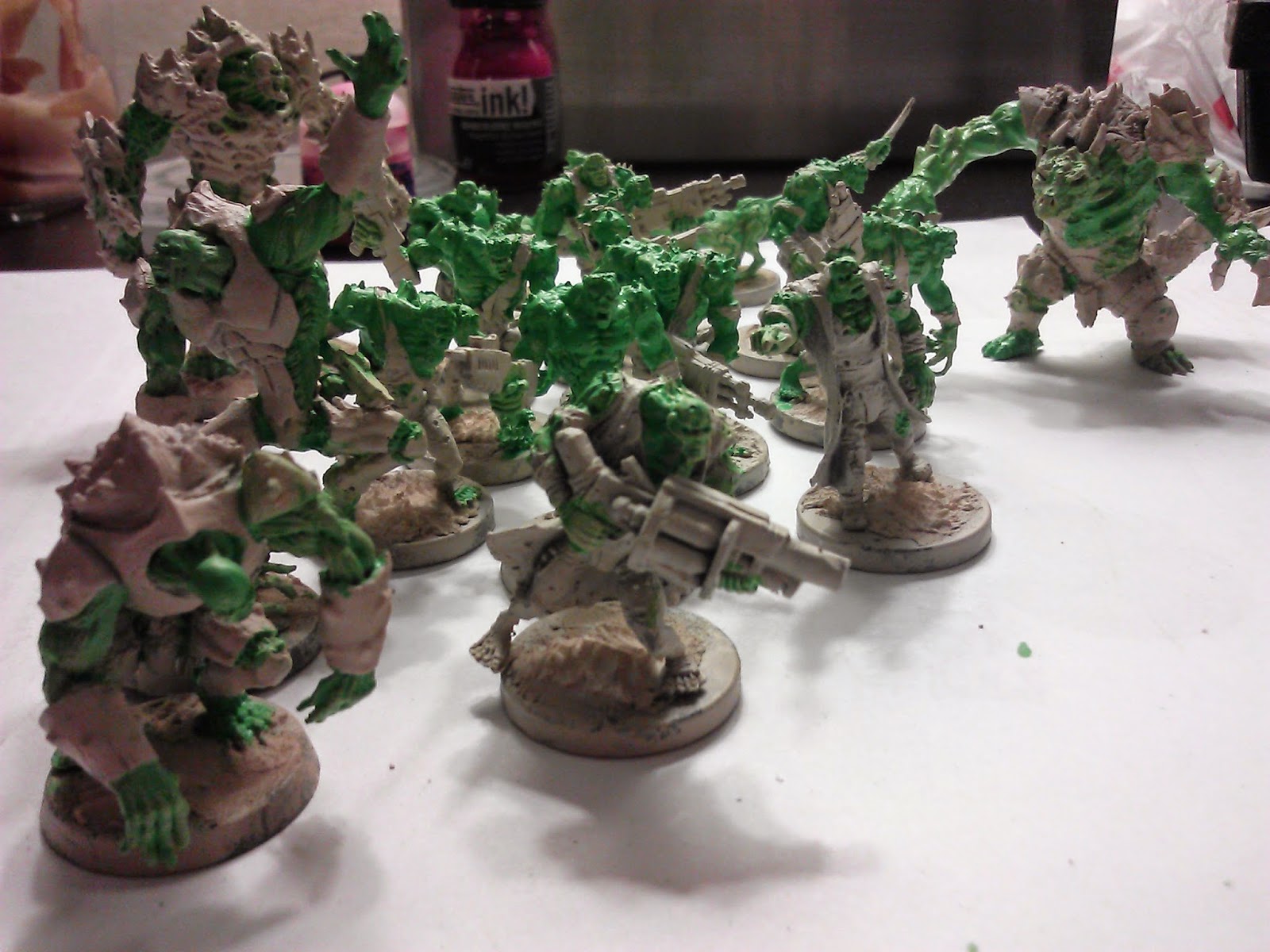 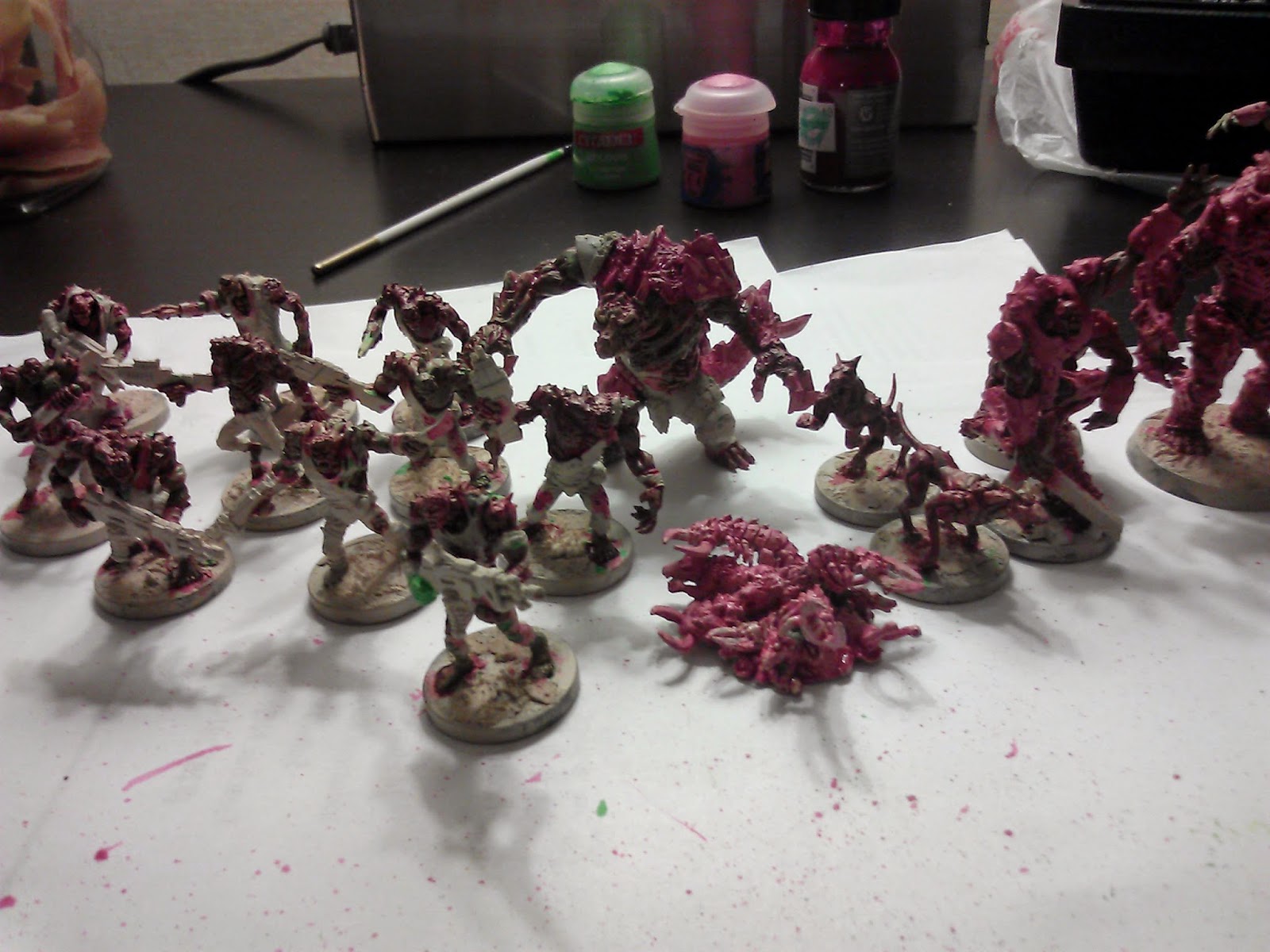 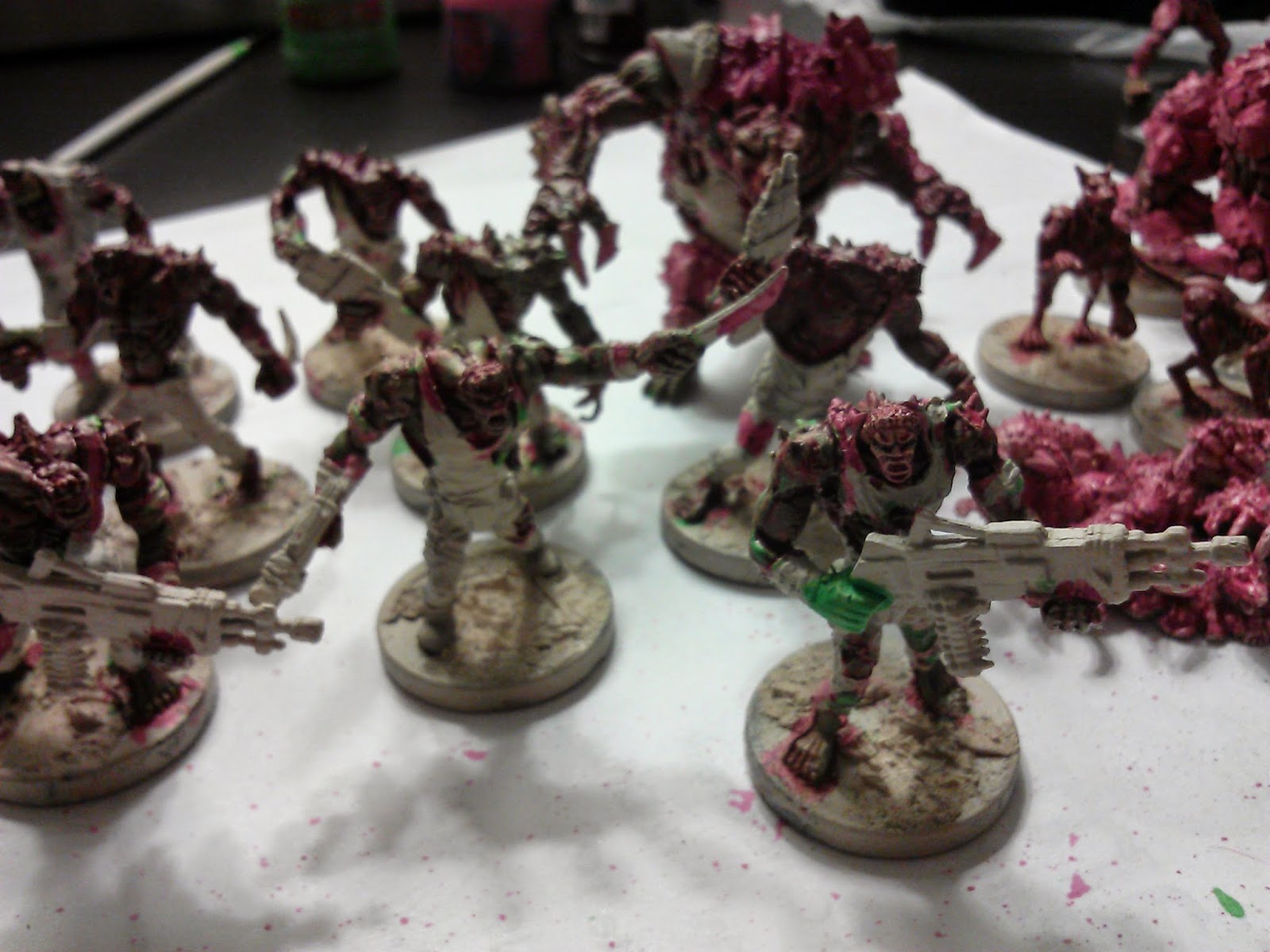 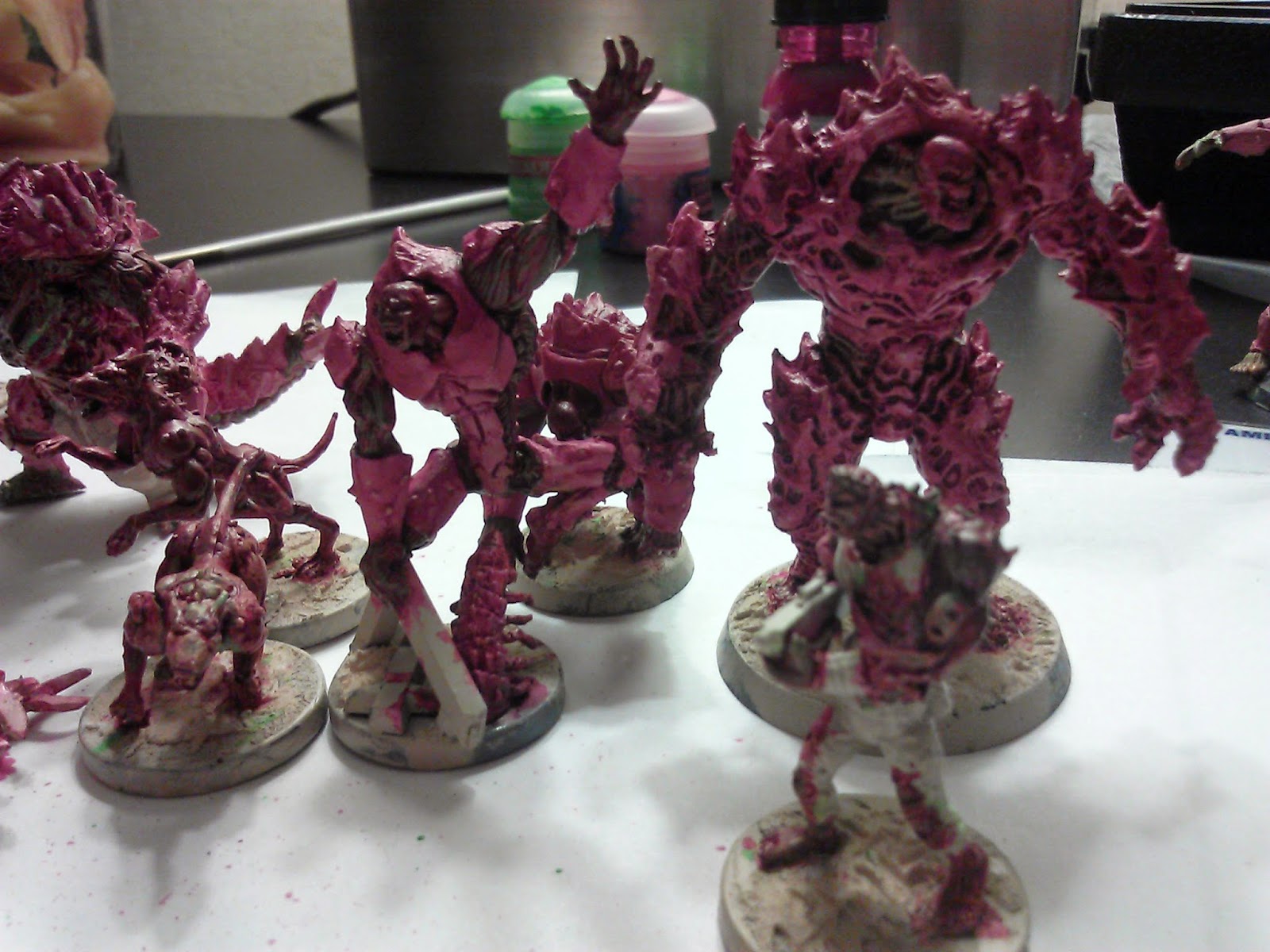 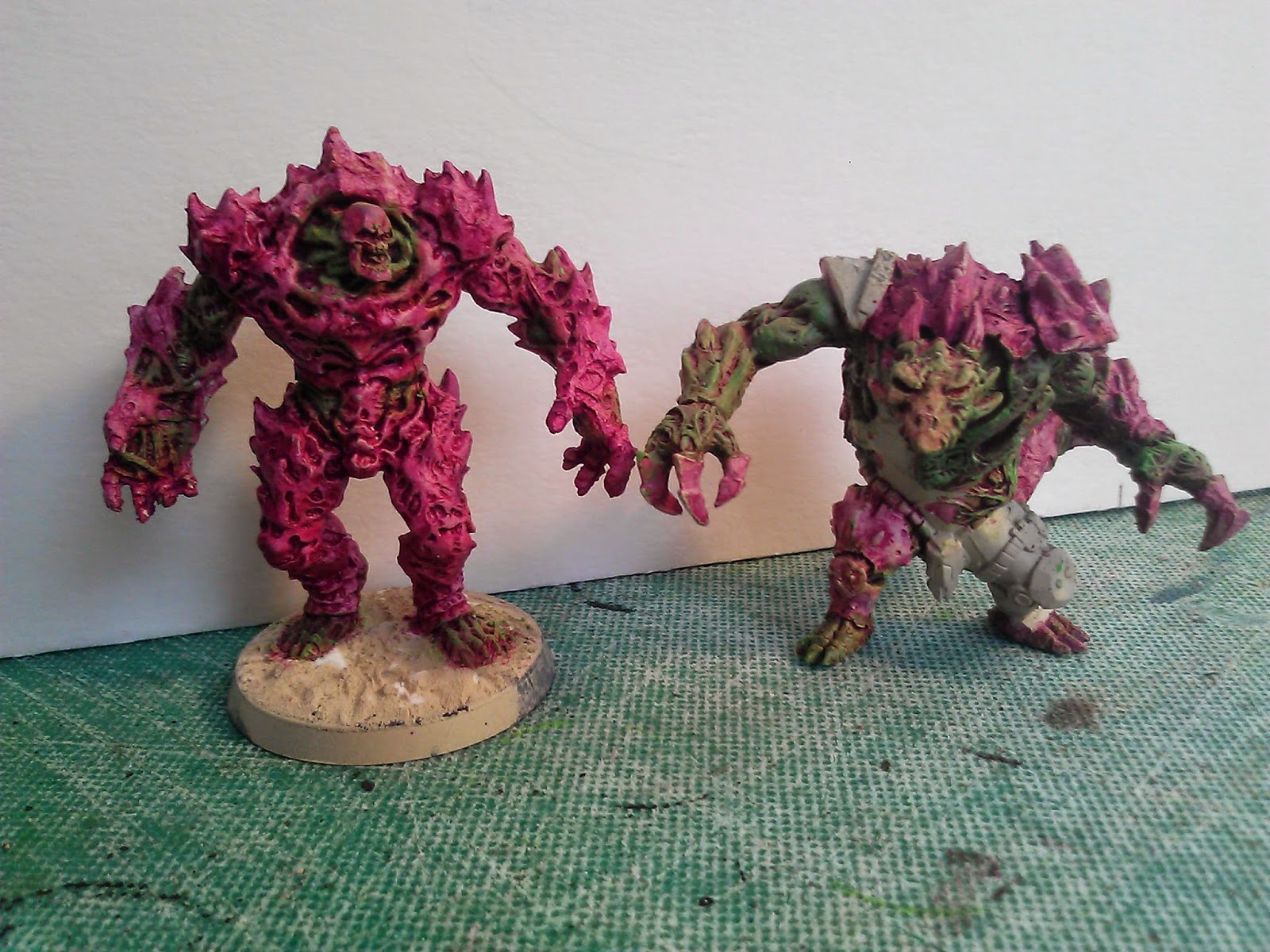 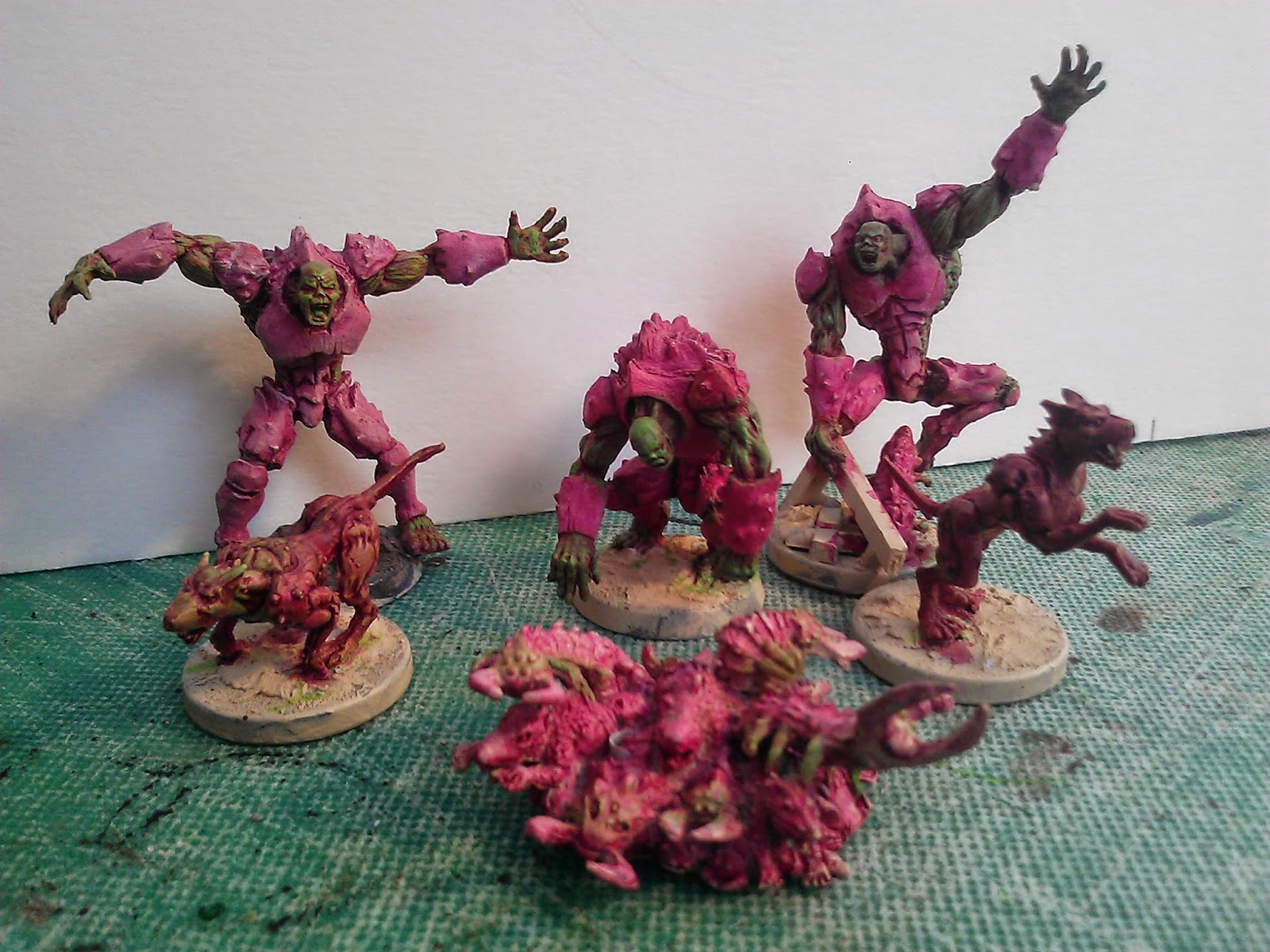 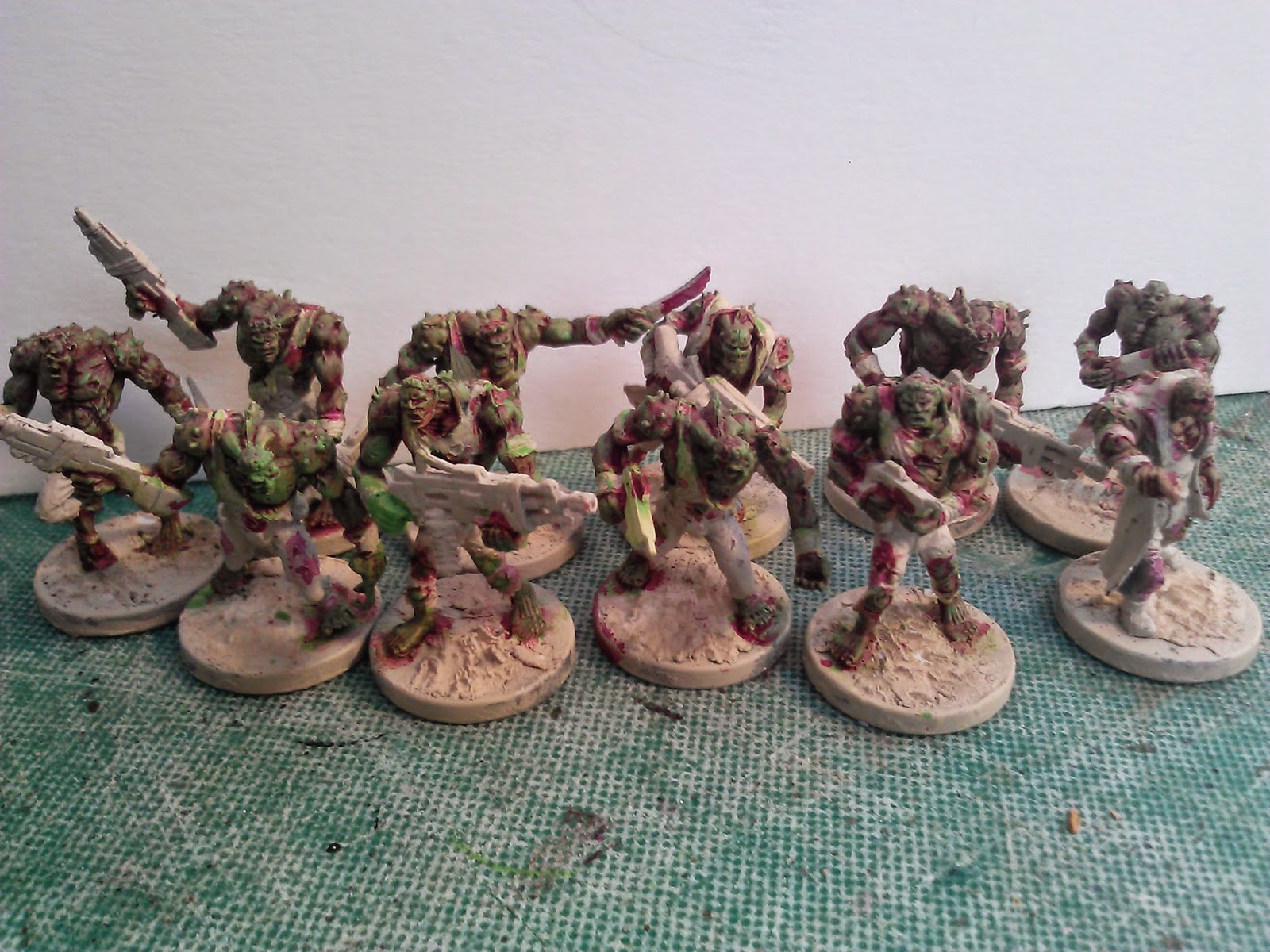 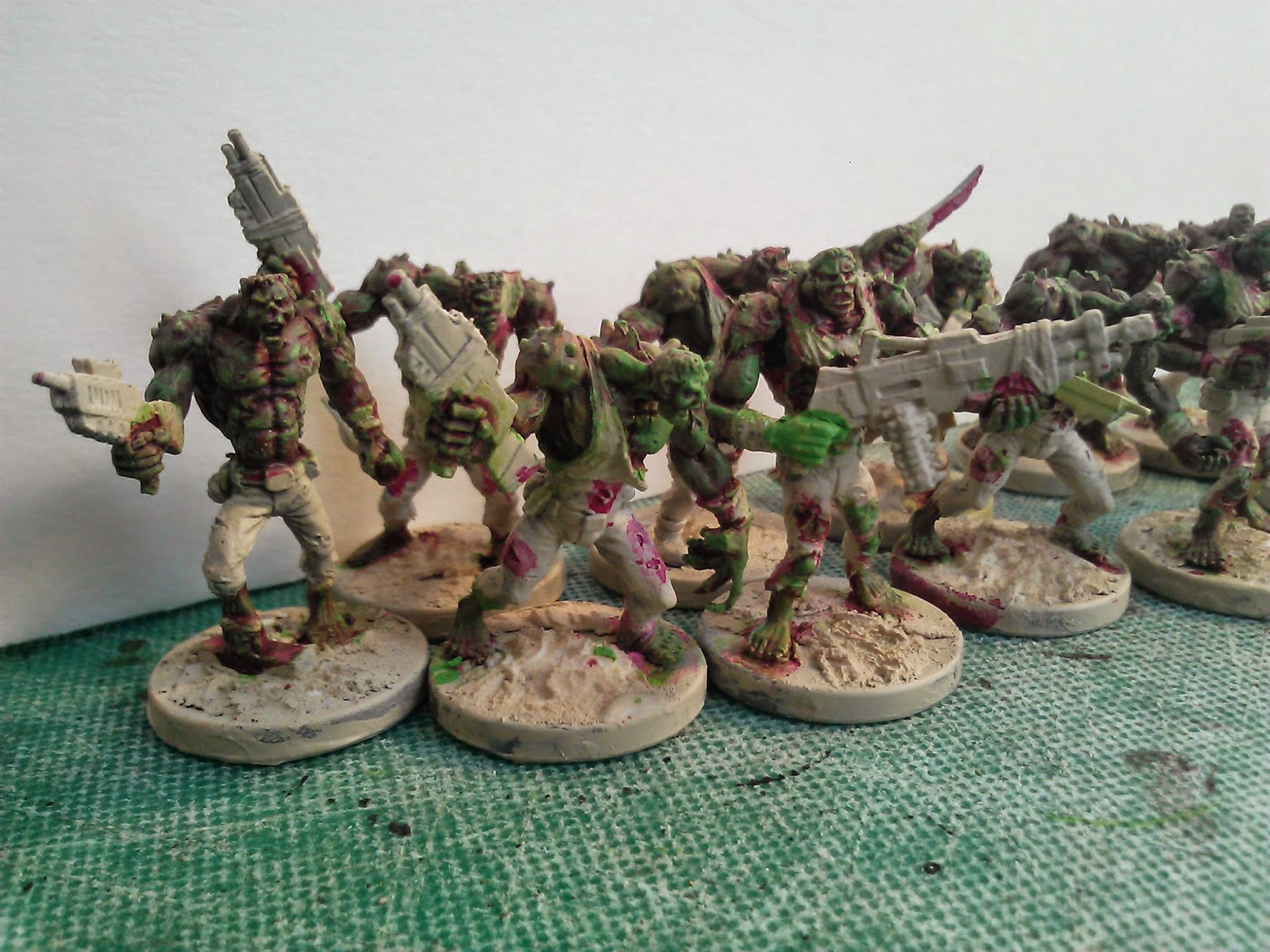 Going with a neon green/bright pink kind of infection look. The rest of the outfits will be dark greys/blacks/whites and maybe a little prison orange. Also spent a bit of time working on my Undead Mordheim warband with additions to the Vampire leader. Still need a name and backstory for this fellow but I am thinking it is something like the Cursed Company. He isn't too happy about being a vampiric undead warrior but he makes the best of it by going out and merc'n it up. 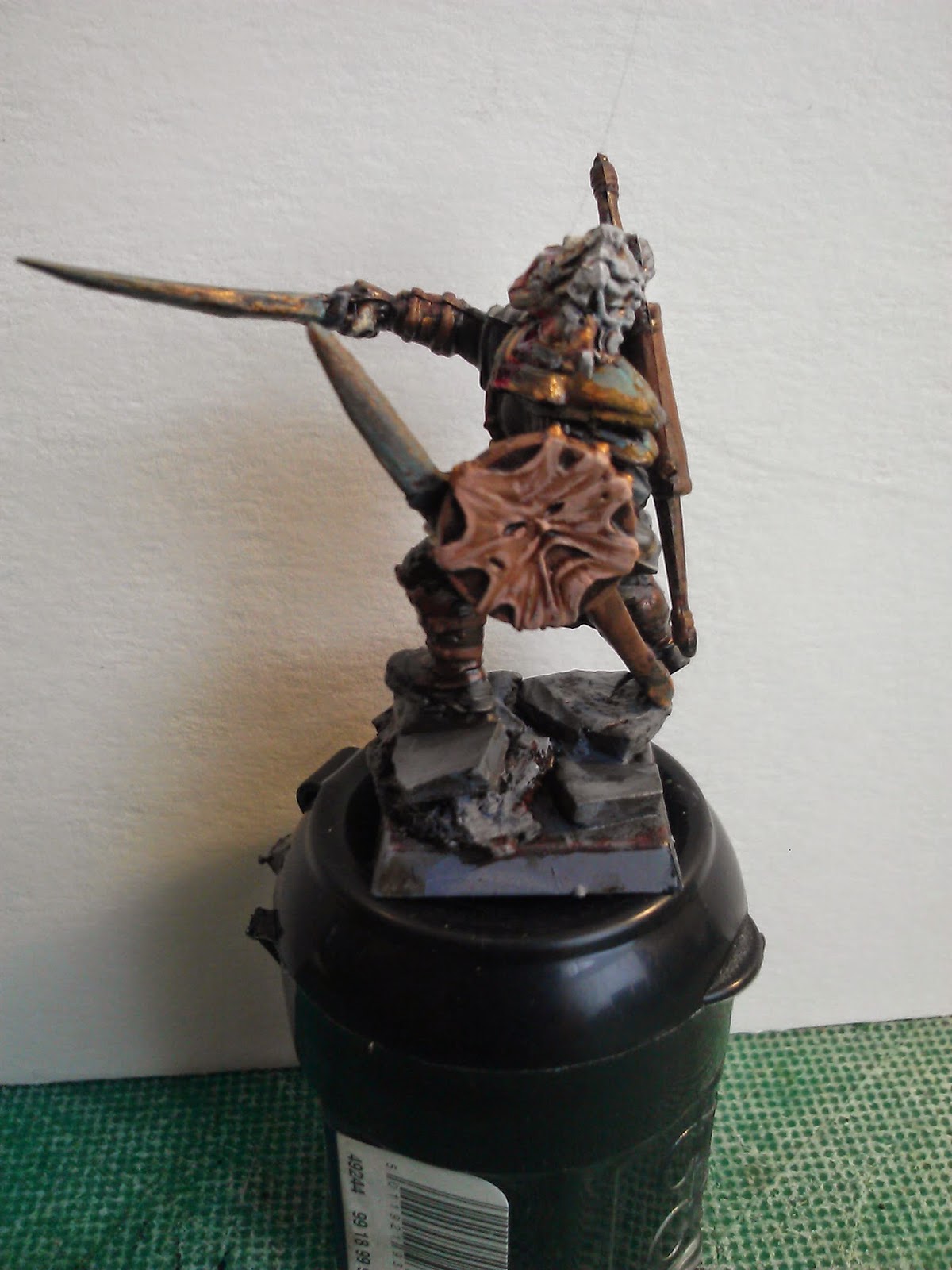 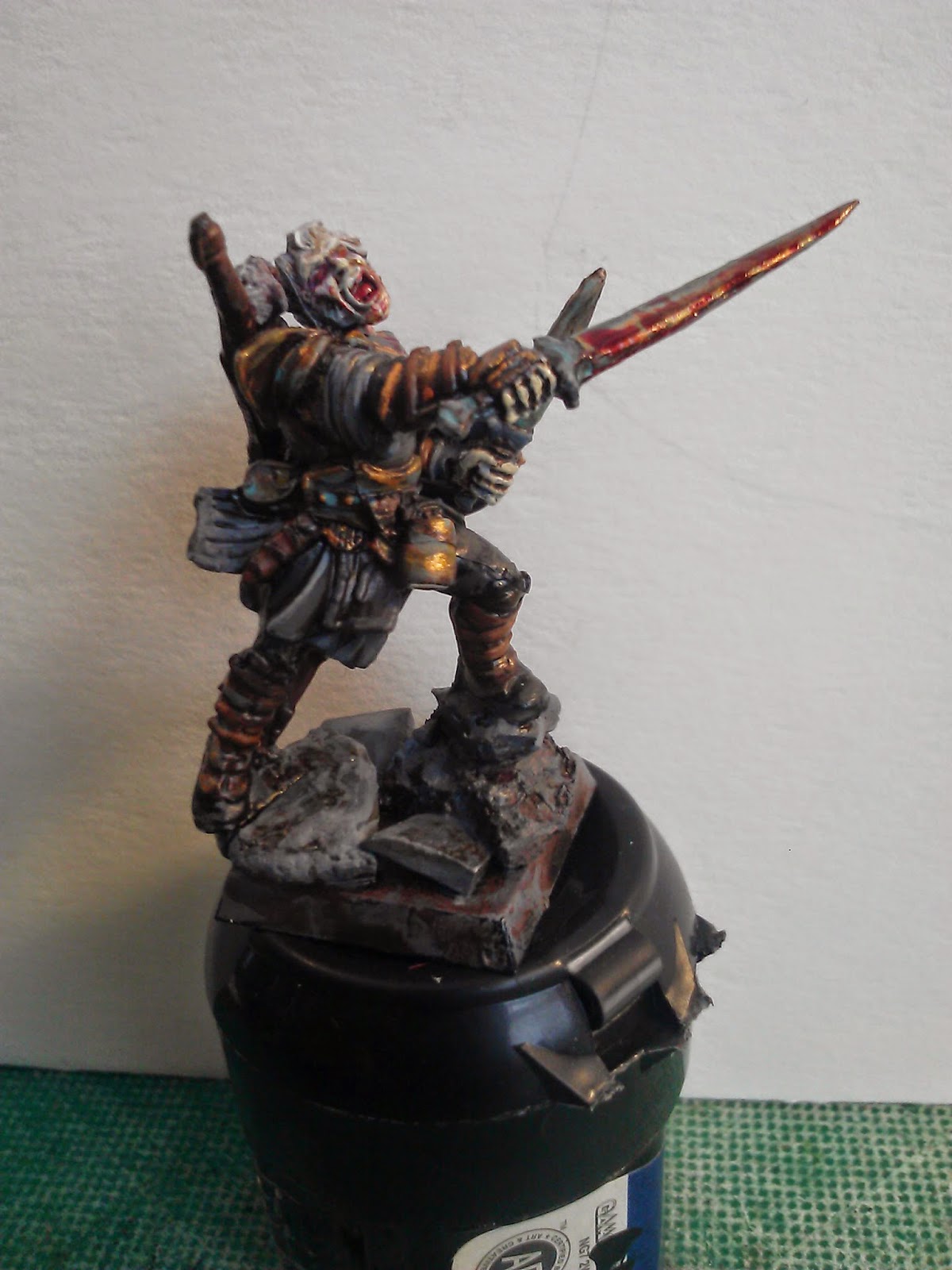 Also managed to get into a start up game of Risk Legacy and played a few games of that. Expect some kind of battle/game reports for that coming up soon. In the meantime... stay warm and keep painting!!
Posted by Randroid 2 comments: 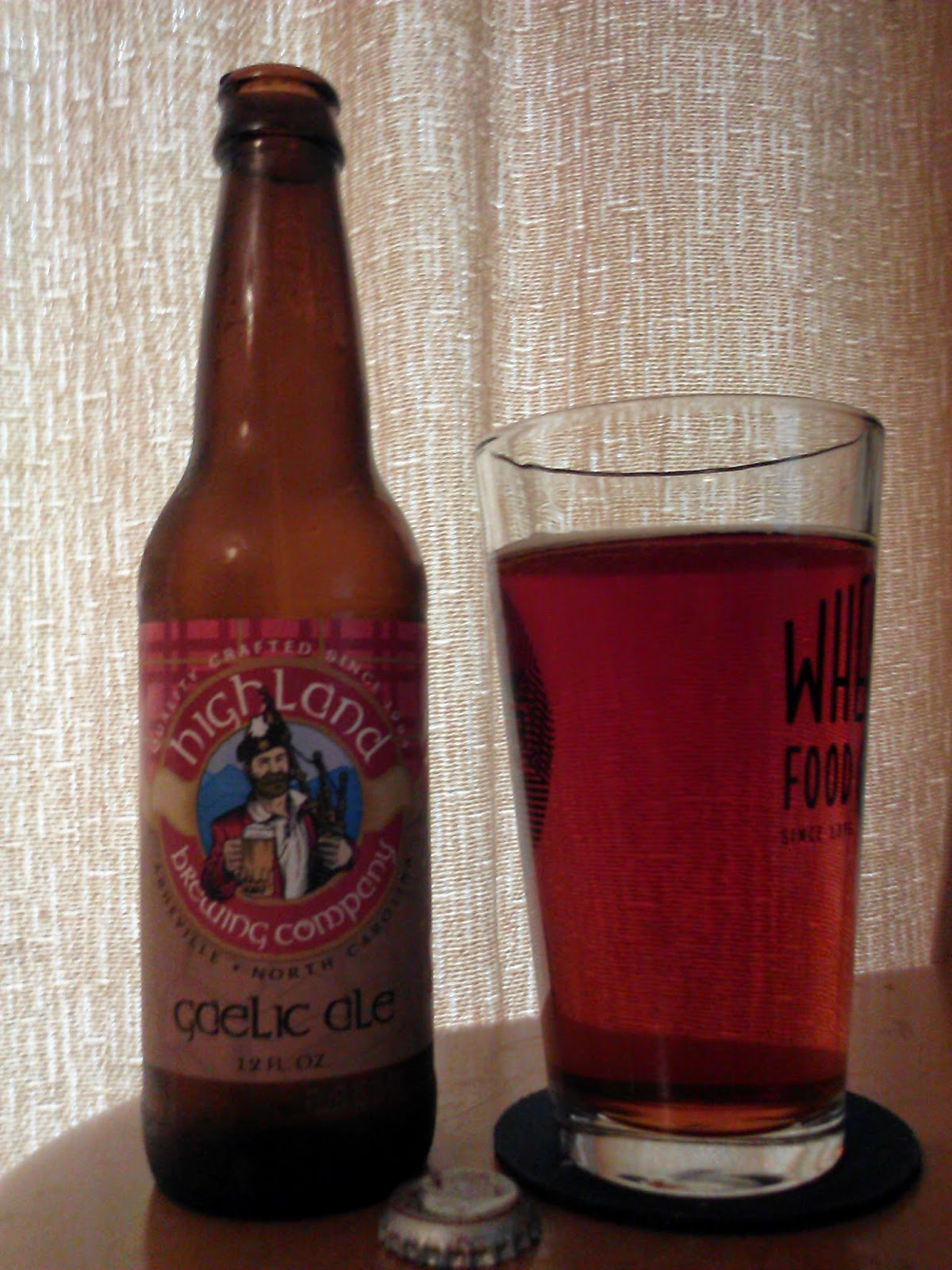 Appearance: 12 brown bottle featuring a highland looking fellow with bagpipes on a a suitably gaelic background. Beer pours a dark amber color with no head to speak of.

Smell: Malt followed by dark dried fruit like prunes or raisins. Something a hint spiced?

First Drink: Big malt up front then mellowing out to feature a bit of hops and the sweet dried fruit flavors.

Mouthfeel: Smooth and crisp but a bit lighter than I expected.

Last Drink: The malt in the front is quite strong! It mellows out to get a bit more citrus and sweet fruit flavor and isn't as noticeable towards the end.

Drinkability: It isn't my favorite red/amber but it has a few things going for it. I wish the malt wasn't as strong in the balance but maybe that is intentional?

Notes: A beer from Asheville, NC that I didn't get to try while I was there! Luckily a friend gave me this bottle as a gift. Hooray for beer gifts!