Three updates in two weeks!? What madness is this!? Perhaps I have been overcome with a sickness... of gaming!

Did I mention somewhere that I started building and collecting a Nurgle force for AoS? Well I did. It's coming along slowly but surely and I have been spending at least 15 to 30 minutes a day gluing and assembling the kits I have. Take a look! 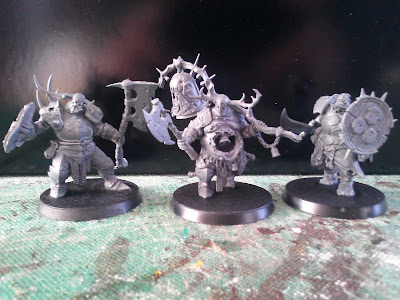 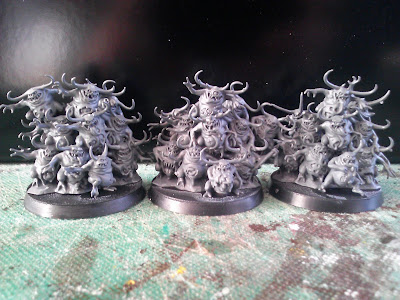 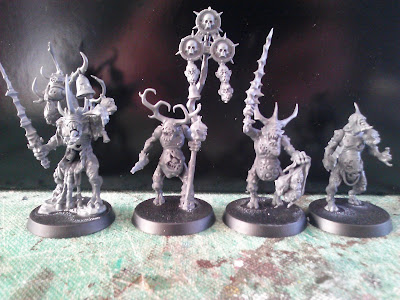 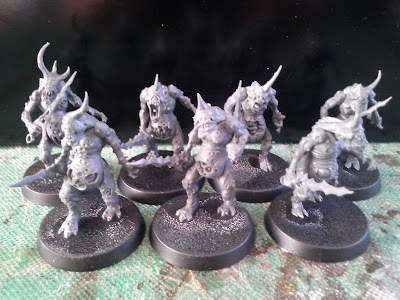 I have since built some nasty bloated fly riders and added a bunch of gross maggot ridden cess pools to the bases to really amp up the Nurgle love. Still have a few heroes, monsters, and more Plaguebearers to build but so far I am loving the look of these guys. Trying to find the perfect balance of gross, horrific, and funny which I think is key to truly capturing the spirit of Papa Nurgle.

But don't forget about Khorne! The blood god wouldn't be happy if you did... 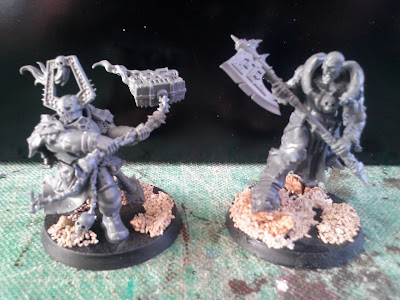 Picked up these two to add to the AoS starter set for my Khorne folks. I love the look of both of these minis and can't wait to paint them up! Still have some other Khorny models to assemble and paint but I am not in a rush...

On the other side of the table we have my current non-monster based gaming love - This Is Not A Test. If you haven't already checked out their Kickstarter do it now!!


I decided I wanted to give a tile based table a try and have started a few 1'x1' tiles to get the project going. They are based on foam which I think I need to reinforce the edges of (to help it keep it's shape). Was thinking maybe some thin foam or balsa to build a frame around the edges? 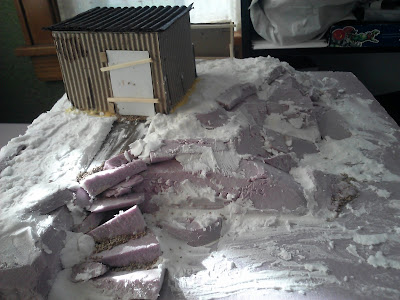 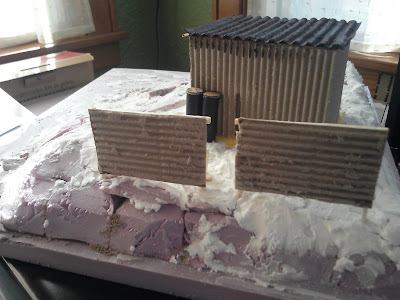 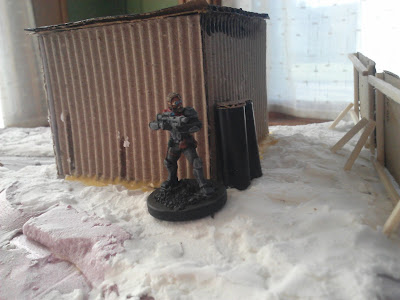 Next up we have some vehicle madness as I trash these things to add to the table. Yahoo! 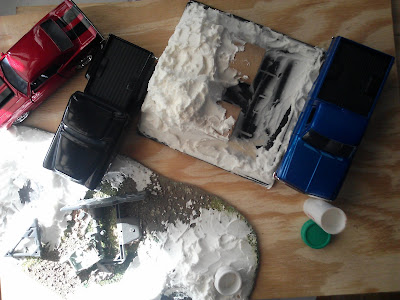 Stay tuned... more to come as I build all kinds of random junk out of trash and building model kits.
Posted by Randroid 2 comments:

Labels: age of sigmar, khorne, nurgle, progress, report, terrain, this is not a test

Last week was Dog Bowl IV at Marmalade Dog! I brought out the Ogres for fun. Roster was:

First game the Ogres came out swinging and pummeled Fejwe's all Skink team on the way to a 2-1 victory. Play of the game: Snotling stomped on a Kroxigor's head and killed him on turn 4 of the first half. Way to go!!


Second game was the beginning of the classic slump to the finish against Whigwham's Nurgle team. It was a great game and Whigwham and I have a bit of history going back now. Though he once used to fear the power of the Ogres he has since learned they can roll plenty of bad dice on the way to the finish. Lost the game but had one amazing play: Snotling dodged out of the Beast of Nurgle's tentacles, through 4 more tackle zones, and made to GFI to 3 die uphill block the Pestigor ball carrier just outside of the endzone. VICTORY!!! Until they picked the ball back up and scored of course!


Third game was the final loss of the day but another great game versus Hippest Hippo's Humans. It wasn't much of a game on the Ogre side but the Humans managed to kill a Snotling with every block for about the first 8 turns of the game. This ended up catapulting Hippo's Humans right to the most cas award for the event! Even if we didn't win it the Ogres were happy to see so many smeared Snotlings on the pitch.


Another great year for the Dog Bowl. Massive thanks to Furry for running this thing so I can get three fun games of Bloodbowl in without having to drive across the midwest! Be sure to check out the KUBBL blog for a detailed rundown on the winners (and lots of terrible photos of me).
Posted by Randroid No comments:

Today is the day! The day for Dog Bowl IV at the Marmalade Dog gaming convention in sunny Kalamazoo. This is the fourth year of the tournament mostly run by Furry with a (very) small bit of help from me. This year I spent some time getting together "prizes" and trophies for the event.


If I play in the event I will be bringing out the Ogres for a fun mix of "hit em in da ead and den run ova dem" and "get these damn Snotlings out of my way!!" I hope to tie three games or maybe even win one. Given that I haven't played any Blood Bowl since Headbangers Ball last year I expect my showing to be less than stellar.

In other gaming news... spent a bit of time at the FLGS Chronocade playing some Age of Sigmar two weeks back. It was a fun low pressure event where we just tried some different scenarios and had a good time. Each player brought 1000 sdk worth of their chosen army and again I went right for the Ogres.

First game was a capture and hold scenario with a tower in the center of the field. Went up against the Sigmarines for the first time out and managed to easily crush most of them in combat. Ran the Gorger in on turn 2 and almost killed the Sigmarine general in one round but was the surrounded and crushed by the other devotees near by. Held on to the tower until the last turn with 1 Leadbelcher remaining but the tiebreaker was decided by number of models and the Sigmar forces had two models in base contact giving them the win. A well fought and fun game for the Beer Gut Tribe! 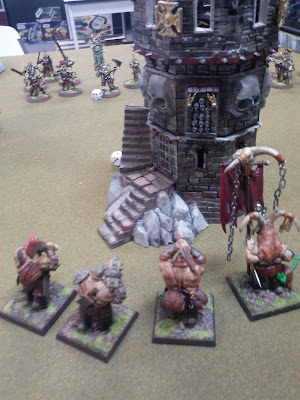 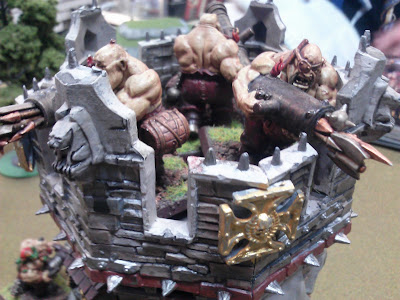 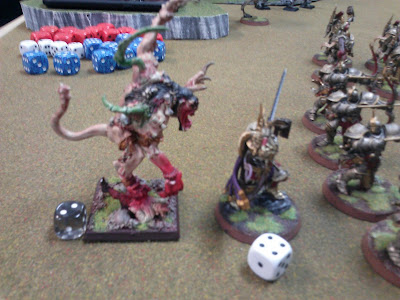 Next up was a storm the castle and clam at least 2 of 3 objectives type scenario against Chaos. You can't really see them from the photos but the Chaos force was massive compared to the number or Ogres on the field. I think he had something like 50 models to my 12. Trying to fit through the "meat grinder" effect of the gates to claim the two objectives located on the other side proved almost impossible. After taking down the forces of Chaos to just 1 unit and 1 hero the Ogres lost as they only controlled one of the three objectives (even after Stumpy the Giant crammed a chosen of Chaos into his pants and proceeded to beat the crap out of the Chaos general in three sustained rounds of combat). Another very fun game! 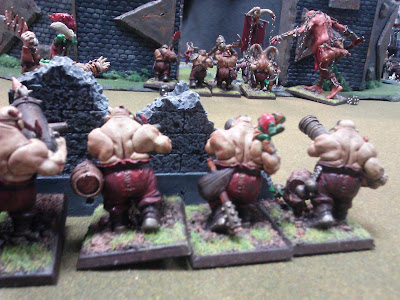 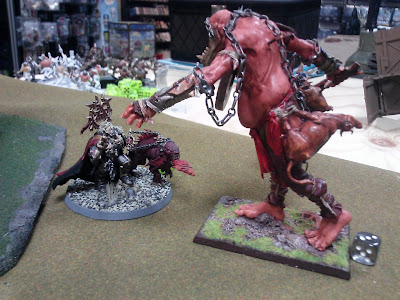 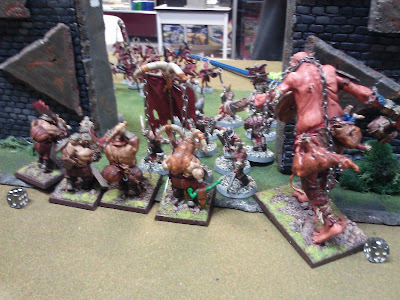 Things I learned - Age of Sigmar can be a lot of fun, especially when playing with objectives. Ironguts are just down right nasty, Giants can be cool, Gorgers not so much, and Leadbelchers aren't bad but there are probably better shooting options for the Ogres.

Next time... the sickness descends... a plague of Nurgle?!
Posted by Randroid No comments: