A continuation of my Basics for Beginners articles which were written back in December of last year - this one dealing with the Special choices for the Ogre Kingdoms. I would be interested to hear other opinions about these choices but I have to say I am pretty set in my ways when it comes to the OK Special selections. 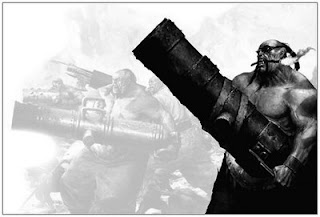 Leadbelchers: Bulls with cannons. Typical unit size is the minimum of 2.
Strengths - These guys have the potential to kill a lot of stuff. They tend to scare off fast movers and are good at protecting/negating flank options. Depending on where/who you play with you may be able to scare less savvy players with the potential high damage but most veteran players will see through that. With their smaller unit size of 2 they are some of the best flankers available in the OK army.
Weaknesses - They are 20 points more then Bulls, can only fire every other turn (at best), have to roll for number of shots (risking a misfire), roll to actually hit (at a crappy range with a mediocre BS), and then actually wound something (at only AP -2). Plenty of chances for something to go wrong (and it often does).
Upgrades - If you want to spend more on your Leadbelcher units get a Bellower. If you flee (after shooting) a charge you get the +1 to your rally and the turn you stand there doing nothing after your rally allows you to reload. Yay? Some will advice taking Champions in these units as they cost less but I have not seen the value of this yet.

Yhetees: Similar to Bulls in their stats, these guys are your surprise attackers. Typical unit size is the minimum of 3.
Strengths - They have a lot of movement, can run through the woods, have magic attacks, higher strength, and are slightly harder to hit in close combat.
Weaknesses - Very expensive with fairly average combat stats. Be careful what you throw these at as they tend to be a "glass cannon".
Upgrades - Don't bother with the Champion, the extra attack is not worth it.

Gnoblar Scraplauncher: A strange Gnoblar contraption that has the threat of a lot of damage, but is fairly unpredictable.
Strengths - Large blast template with Killing Blow is nothing to sneeze at assuming you are good at range guesses and lucky with artillery die. Most people don't expect the killing power of the angry rhinox pulling the thing when it charges into their flanks. Has a decent amount of CC ability for a warmachine crewed by Gnoblars.
Weaknesses - Random chance ahoy! Even the misfire chart has the possibility of letting your opponent target your units and blast away. It is a chariot as well so keep it out of S7 hit-land unless you want to see it explode! Taking multiple Scraplaunchers can also be a weakness as it requires additional units of Gnoblars and Bulls to make it legal.
And that covers it for the Special choices! Lately I have been using the Scraplauncher to great success but I find when it comes to the Special choice it is really a love/hate relationship with these units for most OK generals. Pick one or two units you like and stick with them! In the next update I will go over the Rare choices available to OK players.
Posted by Randroid No comments:

Bell of Lost Souls has some of the most up to date information regarding Warhammer Fantasy and 40K anywhere on the web and I am excited to be a part of their excellent blog community.

As one of the only Warhammer Fantasy Battles and Ogre Kingdoms blogs in the alliance (or in existence to my knowledge) I will strive to bring a unique outlook to the hobby and hopefully lure some of the round-basers to the world of WHFB.

If you are just seeing this blog for the first time - welcome! I cover all the basic things here - army lists, reviews, some news, painting, modeling, and most importantly BEER. I am currently working on finishing my first WHFB army from the Ogre Kingdoms - the Beer Gut Tribe. I am also just starting my Vampire Counts army and I have plans for a couple of Warriors of Chaos lists - mostly built around the Chaos God Malal and his followers (plus some Trolls for good measure). I hope you will enjoy my (meager) content and please feel free to post any comments you may have - I am always open to new ideas and ways of playing the game.
Posted by Randroid No comments:

Well I have been playing my Ogre Kingdoms army for a little over one year now. Back in December of 2008 I wrote this "unit guide" for the Ogre Kingdoms book based on my own experience and opinions. I decided to post them here in a series of updates as a way of keeping track of my own thoughts about the list as well as helping out new WHFB and OK players in some way. I would love to hear comments on this overview if you have them! Today's update will focus on the Core choices in the Ogre Kingdoms army book. 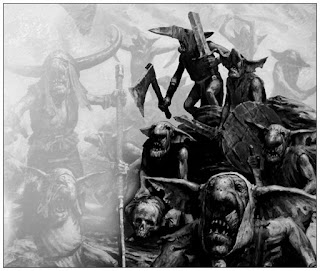 Unit upgrades and Command are very costly for OK units and do not add much tactically. You will find that most OK generals shy away from Full Command. Banners are almost never taken, and if so they are on a "heavy" main unit of Ironguts (or other "Deathstar") with backup from characters. Unit champions are rarely taken unless it is in a unit of Ironguts to avoid nasty character challenges. The most common unit upgrade for OK core units is the Bellower as it is used to break combat resolution ties and adds +1 to your rally after a flee. With this in mind let's look at the Core choices for the Ogre Kingdoms:

Bulls: You are required to field at least one unit of Bulls in every OK list. Many players stop there but Bulls can have their uses against certain opponents. Here is a basic overview of their strengths and weaknesses. Typical units size is the minimum of 3.
Strengths - Cheap and "disposable" in most lists. Good for baiting an enemy into a charge and fleeing, or setting up flank charges for stronger "anvil" units like Ironguts. Ogre Club is actually pretty good as it provides a -2 Armor Piercing to their basic 3 attacks.
Weaknesses - Low leadership, no armor to speak of, crappy (or situational) high cost unit upgrades.
Upgrades - Don't bother with Light Armor unless you plan on adding Ironfists. Ironfists and Light Armor makes the unit cost almost as much as a unit of Ironguts so it is rarely used. If you want an extra attack (which is good against low toughness horde type armies) use Additional Hand Weapons. The most common upgrade to a unit of Bulls is a Bellower to add +1 to your rally roll after baiting a charge. Normal unit upgrade "rules" apply here (see above).

Ironguts: While it may not be readily apparent on paper, Ironguts are superior to a normal Bull in most situations. Do not be lured into taking a charge with these units because they have armor, Ironguts are meant for smashing things not getting smashed. Never accept a charge if you think you might lost the subsequent combat! It is okay to flee with a unit of Ironguts, especially if you have a Bellower in the unit. Rallying on a roll of 9 is very likely to happen. Typical unit size is the 3-4, rarely more.
Strengths - Hard hitting, most armored Core troop available, good character bunker.
Weaknesses - High cost, not that great in subsequent rounds of combat due to Great Weapons.
Upgrades - Most common upgrade is a Bellower. Banners are rarely seen before higher point total games (2000+), and magic banners are rarely used (because most of them are terrible). Normal unit upgrade "rules" apply here (see above).

Gnoblar Fighters: Gnoblars are great for taking hits, magic, and shots you don't want your Ogre units to absorb. The first rule for Gnoblars is to never depend on them! Use them for what they are; a slightly unpredictable and cheap unit. Good for luring frenzied troops, or Dwarfs, away from your Ogres. Good for initial deployments when trying to lure out your opponent's "scary" units. It's typically not a good idea to take a charge with these little guys! Gnoblars are made to die and fleeing is almost always your best option. Typical unit size is 20.
Strengths - Cheap mass of bodies, good for a laugh, sometimes do extraordinary things with sharp stuff.
Weaknesses - Low leadership, easy to kill, will bicker when you don't want them to.
Upgrades - You can add a Groinbiter but it won't do much for you. If you have 2 points just sitting around do it for laughs.

Gnoblar Trappers: Point for point this is one of the best units in the Ogre Kingdoms book. These guys are great at misdirection, march blocking, line of sight blockers against magic and shooting, frenzy bait, hatred bait, and getting in the way of charges (only to flee of course). Just like Fighters don't depend on them to do what you want when you want it, but use them in a general way to get what you need. Typical (and ideal) unit size is 9.
Strengths - Scouting skirmishers! Great for turn 1 march blocking against fast movers that might flank your Ogres. Good for luring troops into difficult terrain after fleeing. Good for wounding, harassing, and killing many types of troop.
Weaknesses - Low leadership, easy to kill, will bicker when you don't want them to.
Upgrades - You can add a Snarefinger (which is slightly more useful than a Groinbiter with +1 BS) but it won't do much for you. Typically better to add another Trapper instead for more wounds and Sharp Stuff shots.

And that covers it for the Core choices! The next update will go over the Special choices available to OK players.
Posted by Randroid No comments:

Sorry for the lack of posts - my grandfather passed away at the beginning of the month and I drove back home to Michigan to attend his funeral and visit family. I'm just now getting back into hobby mode - expect updates on my (many) army projects to come!
Posted by Randroid No comments: