Just went on down to my new FLGS ChronoCade and picked up the new Age of Sigmar box set. Sadly I am about to head away for the next couple days but before I go to the wilderness I wanted to take a quick peek at the contents and share them with you. 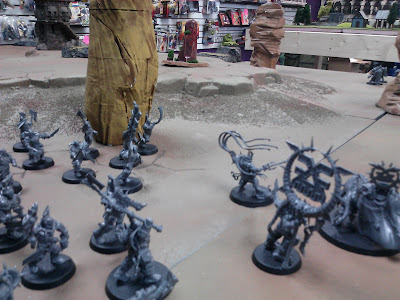 First thing I see walking into the new space of the store is a table full of minis! Always gets me excited! Sadly I wasn't able to hang around and play the game but I am already planning to get back for some tabletop action. 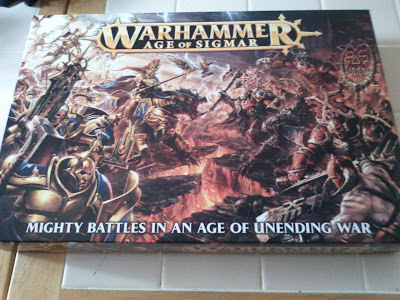 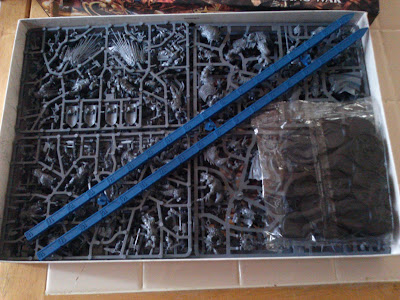 There it is. The box. The much lauded and hated and everything else box of minis. What can I say? The art looks awesome. If I didn't know anything about it I would be interested. Opening it up you find a nice stack of high quality and very detailed minis. And some blue sticks. 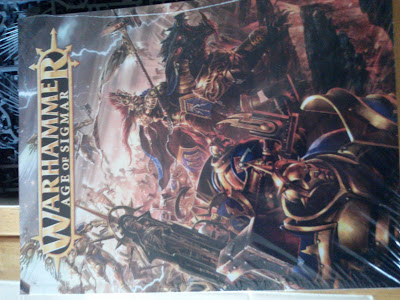 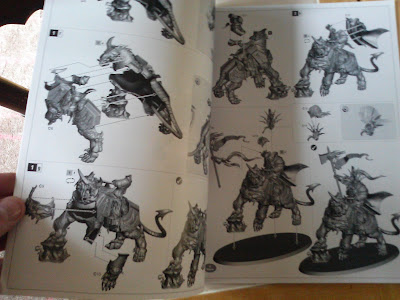 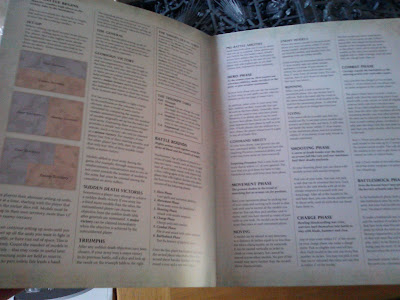 Book that comes included has detailed instructions for mini assembly (very nice)  as well as a once sheet of the new rules. No additional rules though we can't forget that new errata now can we?! 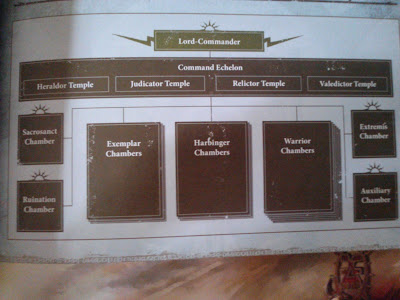 Flicking through the big book I see lots of colorful art and some background for the two starter factions. Also a painting guide and some other stuff you would expect to see like warscrolls and two Battalion lists with special abilities. Plus! There are 6 scenarios which seem to step up the learning curve of the game and new models quite nicely. And this photo. Not sure what it is but it reminded of 40k force organization charts.

More to come later in the week! Hopefully with some games and assembled minis to show.
Posted by Randroid No comments:

Managed to oversee a game of the new Age of Sigmar rules this week in a matchup of the Ogre Kingdoms vs Vampire Counts. I played referee as two completely new Warhammer players took the reigns of the two forces on the table and the results were mostly positive!

First we had to choose what to play with. Since there is nothing in the short 4 page rules about balance or how to make an army list we decided to go with two of the thematic lists at the end of each Battlescroll. That meant for the Ogre Kingdoms it was time to bring in the Gutbuster Wartribe! And with the Vampire Counts we dug up the ole' Deathrattle Horde!

The rules for each and what we added (for fun):

The Gutbusters have the ability of the Ogre Charge which allows them do deal mortal wounds when finishing a charge move. Not too different from the earlier versions of the Ogre Kingdoms but this one is only available as part of this Battlescroll organization.

The Horde brings two special abilities with them on their Battlescroll. First they have the ability to re-roll save rolls of 1 when within 6" of another unit of this battalion. Powerful! Second they can always march 4" when they run which gets them farther into the battlefield at a steady rate.

In the end after counting up all the stats of all the models we came in at 107 wounds for the Ogre Kingdoms vs 109 wound for the Vampire Counts. All in all it seemed pretty even heading into battle and we chose to play on a 2' x 4" table length wise. 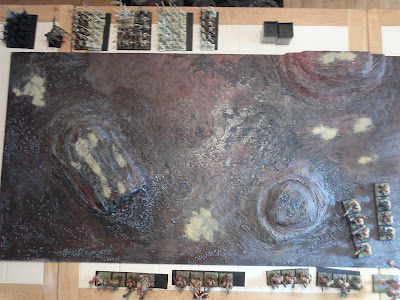 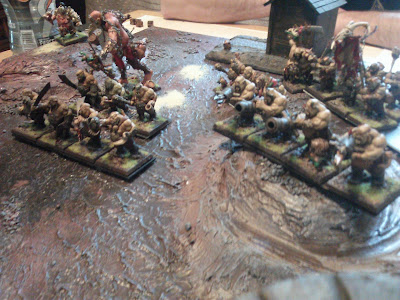 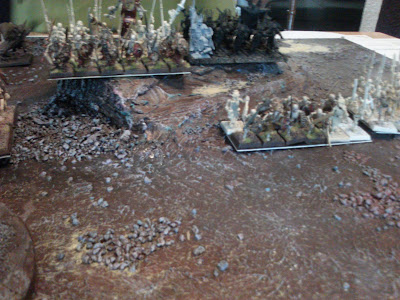 The Gutbusters were the underdogs with less models on the board and chose the Sudden Death objective of staying alive until turn 6.

With the game under way the Gutbusters managed to get the first turn in most of the first phases and proceeded to move up and into position for a potential charge. The Deathrattle Horde followed suite and soon it was just a matter of time before carnage!! 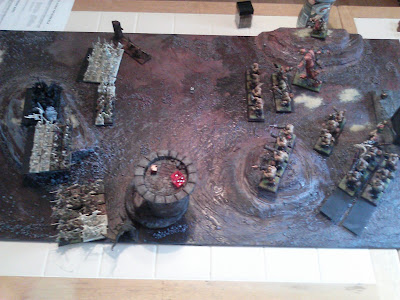 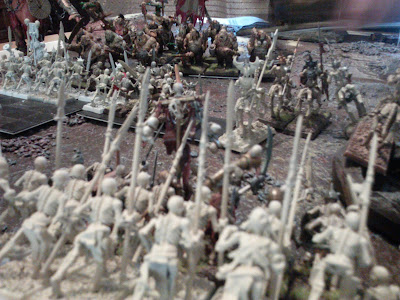 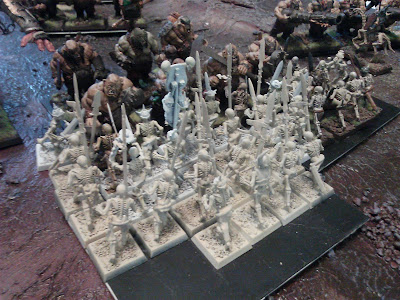 While the Ogres got the first charges in on a unit of Skeletons they didn't count on being stabbed to death by so many spears in the Combat phase. After only one Ogre was left the Giant decided he better get into the action too. 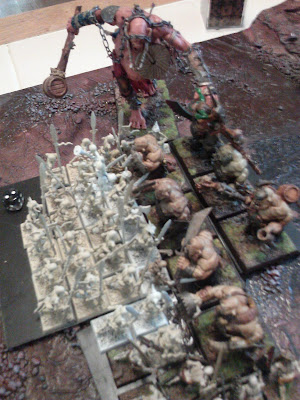 With the help of the Giant and some additional Ogres the first big block of Skeletons began to crumble away though the ability of the nearby Wight King really shined in keeping them standing with an extra save (as their normal save was handily negated by crushing Ogre weapons). 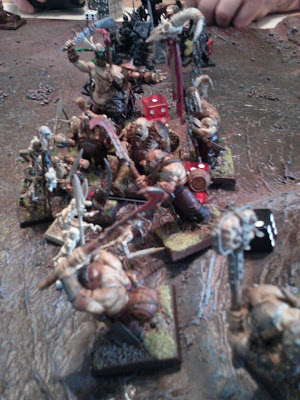 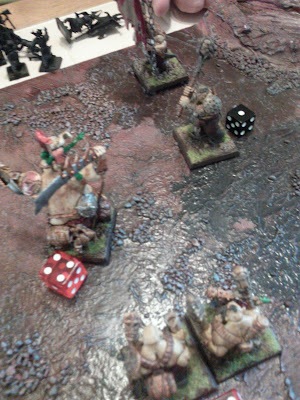 After taking out the Skeletons the Giant felt the full force of the nearby Grave Guard unit and decided to fall on some Ogres on the way out. A large and decisive battle was shaping up in the center of the board while (not shown) the Black Knights and Varghulf took out the unit of Leadbelchers and began eating through the group of Ironguts. Meanwhile back in the center the Butcher fell to the Wight King's blade and things were looking grim for the remaining Ogres. After a couple of failed attempts at eating the Ironguts the Varghulf and remaining Black Knights fell and allowed the Gutbusters to swing around and finish off the remaining Skeletons and Black Knight with the Tyrant crushing the head of the Wight King to dust.

So what did we learn? How about a handy bullet point list!
- The game is easy to pick up and grasp and neither new player had trouble figuring out what did what and when.
- The back and forth in each phase makes the tactics a little more random but also more interesting.
- Choosing your combats is very important!
- The random run and charge was not much of a problem for either army with their command and other special abilities and everyone got where they wanted to go pretty easily.
- It did turn into a bit of a scrum in the middle of the table but part of that was the shape and size of the battlefield we chose.
- Fun was had and both players expressed interest in playing more and learning the game with different factions.

But what did I think about the new rules and gameplay? Glad you asked...

Stuff I liked
- The simplified To Hit and To Wound and Saves. Yes I like the old WHFB style too but it was always one of the hardest things to teach new players. The new mode is easy and quick and you don't have to do a bunch of mental math expect for when dealing with Saves vs. Rending

- The thematic feel of the units. At least in this game the Skeletons and Deathrattle Horde did exactly what I have always wanted to see... acted as a legion of creepy reanimated Skeletons and who wouldn't go quietly! They really hung around and in mass they managed to do some serious damage to the Ogres. Conversely the Ogres really showed their brute strength and killing prowess by smashing the crap right out of the undead minions when they hit.

- The rule of cool! Glad we added the monsters to both lists because they brought a lot of fun to the game and were quite effective. The mechanic of them getting less powerful as they take damage is a good one I think and it is nice not having to worry about Battleshock tests on them as they will never lose a model from their unit until they die.

Stuff I wasn't in love with
- The movement seems a bit needlessly sloppy when you are playing with larger units of 20-30. We kept our big units on movement trays until we got into Combat but even then it was a bit of a mess. Couple that with the ability to stack minis on bases and well... I ended up with 5 broken Skeleton miniatures which I am not too happy about.

- The terrain rules. I like terrain and the rules for it in the 4 page book are basically anti-terrain. Since there are no rules besides the magical D6 table I can't see a lot of love or effort going into this for most tables. Of course that might change with the release of new kits and rules.

- The rules lookup. Of course it is a new set of rules and this is bound to happen. Still! With each unit having rules on it's own Battlescroll section and some units having rules on other Battlescrolls (like the Vampire Counts basically having the ability to summon units of any type from any of the scrolls) and then adding in the special rules for each Character, and then the rules for each terrain piece, and then the rules for each of the special organizations we used... it just felt messy and unorganized.

- The lack of rules clarity. Especially in regards to units and their equipment. Who has what? Who can have what? Can we have mixed equipment in our units? Simplicity is nice but simple to the point of just making up your own solution can be frustrating.

So there you have it. First impressions are mostly positive and I felt the two forces we played with were pretty balanced from beginning to end. With a few different rolls the game could have gone either way a couple times. I hope to see some more direction for rules and army composition in the future but I am certainly excited to be playing Warhammer again and the idea of getting new blood playing in my area is great too.
Posted by Randroid 3 comments:


So there we have all that... and of course all the rules are up and accessible. You've no doubt read them all multiple times by now right!?

I won't lie. I am excited. I haven't played any WHFB 8th ed in a year or more and the interest around these parts is at an all time low. Hoping that with the opening of a new FLGS with more gaming space and the release of this new version that is about the change. Going to be playing my first game of AoS later today so I will report on my experiences next time around.

Meanwhile... been working on a new Blood Bowl  team for Chaos Cup, a new Dwarf warband for Mordheim, and a miniature for the Chaos Cup Legacy team. Here is the photographic evidence! 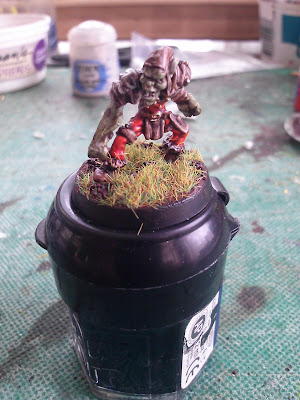 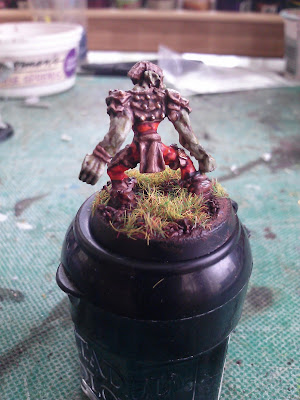 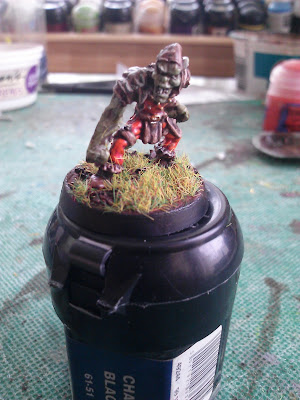 This is my Hobgoblin #13 for the Chaos Cup 15 Chaos Dwarf legacy team. Pretty basic. I like how he turned out though. 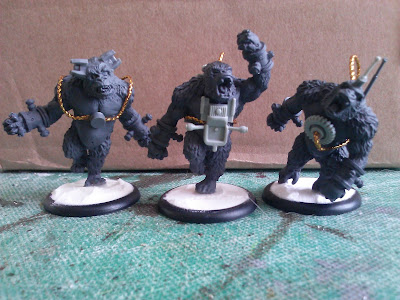 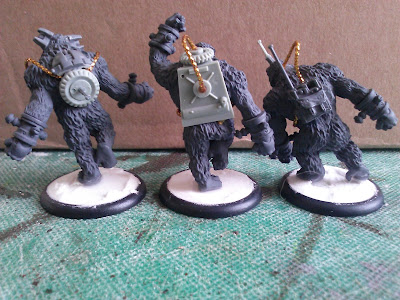 These are the three big guy apes for my new Chaos Pact Blood Bowl team. Left to Right you have the Minotaur, Ogre, and Troll. 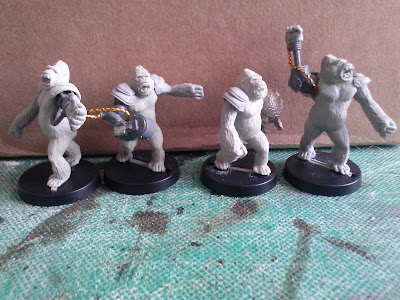 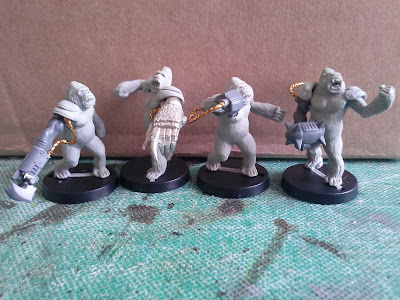 These are the Chaos Marauder apes. Their twisted creator has something for giant arms and tubes. 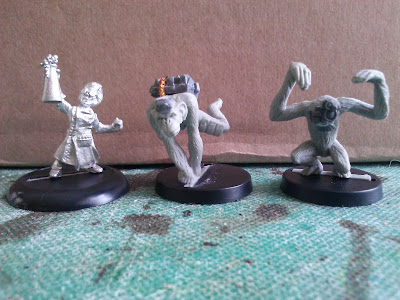 Speaking of which here is the twisted Halfling scientist himself! Plus the Dark Elf and Goblin apes.
Posted by Randroid 1 comment: